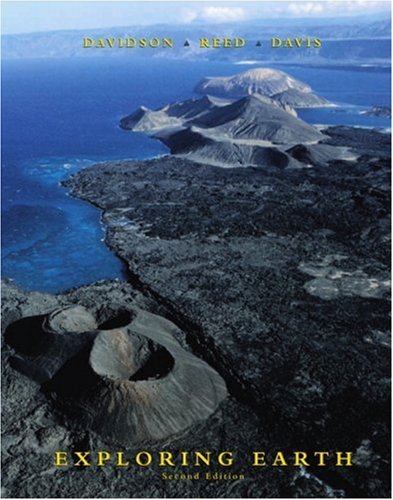 In Stock
$40.99
inc. GST
By employing plate tectonics as its central and unifying theme, this book takes an integrative and process-oriented approach in presenting the physical geology topics. It features: an art program developed by the authors; engaging "Focus On" essays that tie the theory to our daily lives; and student-friendly teaching strategies.
Good Well Read
Only 1 left

For an introductory physical geology course taught at both two- and four-year schools.

Exploring Earth takes an integrative, process approach to teaching physical geology by presenting the traditional breadth of topics using plate tectonics as a unifying theme. These highly respected researchers and teachers explore the science of geology with the reader via clear, comprehensible prose and an exceptional art program.

In 1994 Professor Davidson received the UCLA Harriet and Charles Luckman Outstanding Teaching award, and in 1998 he received the Wager Medal of the International Association of Volcanology and Chemistry of the Earth's Interior. Davidson is an igneous petrologist and geochemist, with a keen interest in volcanology. His work focuses primarily on volcanoes in the Caribbean, the Andes, Ascension Island in the south Atlantic, Iran, and Kamchatka in Russia. In his spare time, he enjoys travel, photography, cricket, football (both types), and music.

Walter E. Reed received his Ph.D. in 1972 from the University of California, Berkeley and joined the faculty of the Department of Earth and Space Sciences at the University of California, Los Angeles, in 1973. Prior to his arrival at UCLA, he worked in an oil company research laboratory for four years and worked for two years for the Department of Defense on the Nuclear Test Site and at the National Reactor Test Range. He has won two "best paper" awards, one in organic geochemistry and one (with his graduate student) in structural geology. Professor Reed has taught continuously since arriving at UCLA, and his courses include Introductory Geology, Sedimentology and Sedimentary Petrology, and Field Geology, spending six to eight weeks each summer with students in the Sierra Nevadas with the latter course.

Professor Davis received a Guggenheim Fellowship in 1995 to conduct research in the Department of Earth Sciences at the University of Oxford. Upon his return to UCLA, he assumed the position of senior editor of the American Geophysical Union Journal of Geophysical Research (Solid Earth). His research uses geophysical experiments to study lithospheric dynamics. He has installed magnetometer arrays on volcanoes on Kilauea, Hawaii and Washington's Mount St. Helens and has carried out seismic array studies of the Mount Etna volcano and the Rio Grande, East African, and Baikal rifts. Professor Davis' interests include racquetball, sailing, hiking, and backpacking with his family.

(NOTE: Each chapter begins with Overview and Introduction and concludes with Summary, Key Terms, and Questions for Review and Further Thought.)

I: PLANET EARTH: ACTING AND INTERACTING.

1. The Changing Planet: Earth as a System.
Understanding Earth: The Question of Scale. Geologic Time: An Important Perspective. A Process Approach to Physical Geology. Focus 1.1: Earth Systems and Connections: Can Plate Tectonics Cause Ice Ages? Focus 1.2: A Matter of Perspective: Big and Small Numbers. Focus 1.3: The Philosophy of Science.2. Earth: Origin and Composition.
The Composition of the Universe. The Building Blocks of the Universe. Our Solar System. The Planet Earth. The Future of Earth and Our Solar System. Focus 2.1: A Chemistry Refresher: Atoms and Molecules. Focus 2.2: The Doppler Shift: Evidence for the Expanding Universe and Other Solar Systems. Focus 2.3: Impacts and Their Effects on Earth. Focus 2.4: Planetary Density. Focus 2.5: The Moon.

GOR004607802
Exploring Earth: An Introduction to Physical Geology by Jon P. Davidson
Jon P. Davidson
Used - Good
Paperback
Pearson Education (US)
2001-09-20
549
0130183725
9780130183729
N/A
Book picture is for illustrative purposes only, actual binding, cover or edition may vary.
The book has been read but remains in clean condition. All pages are intact and the cover is intact. Some minor wear to the spine.