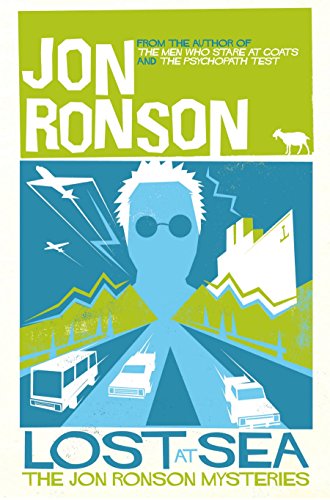 Lost at Sea by Jon Ronson

Lost at Sea: The Jon Ronson Mysteries by Jon Ronson

Jon Ronson has been on patrol with America's real-life superheroes and to a UFO convention in the Nevada desert with Robbie Williams. He's met a man who tried to split the atom in his kitchen and asked a conscious robot if she's got a soul.

Fascinated by madness, strange behaviour and the human mind, Jon has spent his life exploring mysterious events and meeting extraordinary people. Collected from various sources (including the Guardian and GQ) Lost at Sea features the very best of his adventures.

Frequently hilarious, sometimes disturbing, always entertaining, these fascinating stories of the chaos that lies on the fringe of our daily lives will have you wondering just what we're capable of.

Portions of this book have appeared previously, in slightly different form, in Out of the Ordinary, What I Do, the Guardian and GQ (USA).

'Funny and thought-provoking' Financial Times 'Compelling and eye-opening ... hugely compulsive reading' Psychologies 'Comic and entertaining, but with a serious effect as we catch glimpses of the odd things ticking away inside some real characters' Scotsman
Jon Ronson is an award-winning writer and documentary maker. He is the author of many bestselling books, including Frank: The True Story that Inspired the Movie, Lost at Sea: The Jon Ronson Mysteries, The Psychopath Test, The Men Who Stare at Goats and Them: Adventures with Extremists. His first fictional screenplay, Frank, co-written with Peter Straughan, starred Michael Fassbender. He lives in London and New York City.
GOR007952800
9781447223917
1447223918
Lost at Sea: The Jon Ronson Mysteries by Jon Ronson
Jon Ronson
Used - Like New
Paperback
Pan Macmillan
2013-03-27
480
N/A
Book picture is for illustrative purposes only, actual binding, cover or edition may vary.
The book has been read, but looks new. The book cover has no visible wear, and the dust jacket is included if applicable. No missing or damaged pages, no tears, possible very minimal creasing, no underlining or highlighting of text, and no writing in the margins
Trustpilot