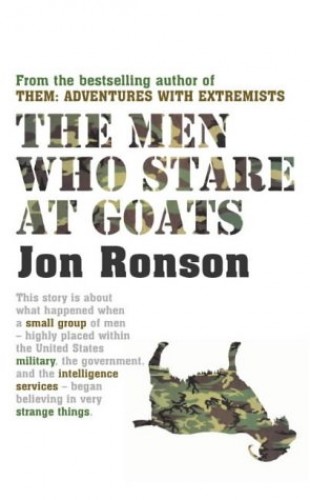 In 1979 a secret unit was established by the most gifted minds within the US Army. Defying all known accepted military practice - and indeed, the laws of physics - they believed that a soldier could adopt the cloak of invisibility, pass cleanly through walls and, perhaps most chillingly, kill goats just by staring at them. Entrusted with defending America from all known adversaries, they were the First Earth Battalion. And they really weren't joking. What's more, they're back and fighting the War on Terror.

Ronson's highly acclaimed bestseller, THEM: ADVENTURES WITH EXTREMISTS, examined the paranoia at the fringes of Bill Clinton's America. THE MEN WHO STARE AT GOATS reveals extraordinary - and very nutty - national secrets at the core of George W Bush's War on Terror.

With first-hand access to the leading players in the story, Ronson traces the evolution of these bizarre activities over the past three decades, and sees how it is alive today within US Homeland Security and post-war Iraq. Why are they blasting Iraqi prisoners-of-war with the theme tune to Barney the Purple Dinosaur? Why have 100 de-bleated goats been secretly placed inside the Special Forces command centre at Fort Bragg, North Carolina? How was the US Military associated with the mysterious mass-suicide of a strange cult from San Diego? THE MEN WHO STARE AT GOATS answers these, and many more, questions.

Jon Ronson is an award-winning writer and documentary maker. He is the author of many bestselling books, including Frank: The True Story that Inspired the Movie, Lost at Sea: The Jon Ronson Mysteries, The Psychopath Test, The Men Who Stare at Goats and Them: Adventures with Extremists. His first fictional screenplay, Frank, co-written with Peter Straughan, starred Michael Fassbender. He lives in London and New York City.
GOR001286987
The Men Who Stare At Goats by Jon Ronson
Jon Ronson
Used - Very Good
Hardback
Pan Macmillan
2004-11-05
240
0330375474
9780330375474
N/A
Book picture is for illustrative purposes only, actual binding, cover or edition may vary.
This is a used book - there is no escaping the fact it has been read by someone else and it will show signs of wear and previous use. Overall we expect it to be in very good condition, but if you are not entirely satisfied please get in touch with us
Trustpilot