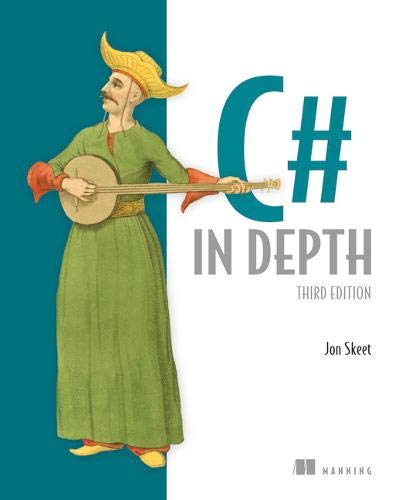 C# in Depth
by Jon Skeet

This book is aimed at intermediate to advanced developers who already know C# to some extent - but are possibly very rusty.

C# in Depth by Jon Skeet

C# in Depth has become widely regarded as one of the best books in its field, focusing on C# as a language to provide an unparalleled level of detail. It explains not just what the language does, but also why it was designed that way. C# in Depth, Third Edition has been updated and expanded to cover the new features in C# 5, such as async modifier and async await operator which provide greater support for asynchronous operations and improve the ability to write asynchronous code which is readable, robust, and maintainable. It expertly guides the reader through the details and gives a new level of clarity about how the language works and how to use it most effectively.

This book is aimed at intermediate to advanced developers who already know C# to some extent - but are possibly very rusty.

C#, which is used to write asynchronous code, is a language primarily developed by Microsoft, targeting the .NET platform and is widely used in the corporate world. .NET 4.5, released August 2012, supports C# 5 which is the next version of the language and contains features that make it much easier to write apps for Windows 8, which relies heavily on asynchrony.

Jon Skeet is a Senior Software Engineer at Google, working in London. He has been involved in the C# community since 2002, initially in newsgroups, then through his blog, user groups, international conferences and the Stack Overflow Q&A site. Jon enjoys putting the language through its paces, finding new and interesting ways to use and abuse it.

GOR006990000
C# in Depth by Jon Skeet
Jon Skeet
Used - Very Good
Paperback
Manning Publications
2013-07-28
631
161729134X
9781617291340
N/A
Book picture is for illustrative purposes only, actual binding, cover or edition may vary.
This is a used book - there is no escaping the fact it has been read by someone else and it will show signs of wear and previous use. Overall we expect it to be in very good condition, but if you are not entirely satisfied please get in touch with us.