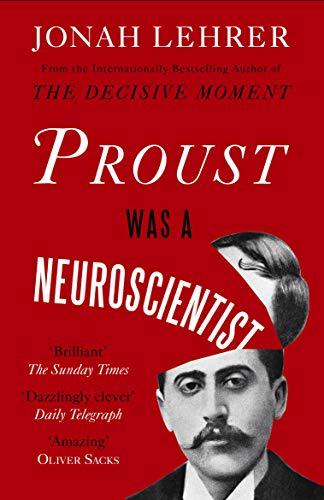 Proust Was a Neuroscientist
by Jonah Lehrer

In Stock
$22.49
inc. GST
An illuminating and unusual book about how famous artists have anticipated the discoveries of neuroscience.
Very Good Good
6 in stock

Proust Was a Neuroscientist Summary

Proust Was a Neuroscientist by Jonah Lehrer

Is science the only path to knowledge? In this sparkling and provocative book, Jonah Lehrer explains that when it comes to understanding the brain, art got there first. Taking a group of celebrated writers, painters and composers, Lehrer shows us how artists have discovered truths about the human mind - real, tangible truths - that science is only now rediscovering. We learn, for example, how Proust first revealed the fallibility of memory; how George Eliot understood the brain's malleability; how the French chef Escoffier intuited umami (the fifth taste); how Cezanne worked out the subtleties of vision; and how Virginia Woolf pierced the mysteries of consciousness. It's a riveting tale of art trumping science again and again.

Proust Was a Neuroscientist Reviews

If all science books were as successful in bridging the divide between art and science as this one is, there would no longer be a divide to bridge. -- Christopher Potter * * Sunday Times * *
In this amazing first book [Lehrer] bridges 'the two cultures' with ease and grace. His clear and vivid writing - incisive and thoughtful, yet sensitive and modest - is a special pleasure. * * Oliver Sacks * *
Still only in his mid-twenties, Lehrer is a dazzlingly clever young man whose writing bears witness to both the clarity of his scientific training and the humanity of his literary studies. The Whitmanesque electricity of all the thought and heart he has put into this book fizzes from each sentence. * * Telegraph Review * *
There is more content here than in many books three times as long . . . I've heard it said that we live in a golden age as far as science writing is concerned. I've no idea, but I do know a golden book when one bumps into me, and this is one. * * Irish Times * *
A slim, brainy book about the brain, modernist art, and literature . . . Lehrer writes skillfully and coherently about both art and science - no small feat. * * Entertainment Weekly * *
Lehrer is gifted with the ability to find philosophy in science and stray bits of science buried amid the rubble of literary history. He is less critic than armchair philosopher, searching for meaning anywhere great thinkers have left their footprints. * * San Francisco Chronicle * *
A precocious and engaging book that tries to mend the century-old tear between literary and scientific cultures . . . Lehrer is smart, and there are some fun moments in these pages. * * New York Times Book Review * *
In this fascinating and unusual book, Lehrer makes an insightful case for Art triumphing over Science . . . Lehrer takes the modern-day reader into the archives of literary history, pondering over the musings of poets, writers, artists and composers in order to prove his theory. * * The Skinny * *
The self-help book to end all self-help books . . . A sort of one-man third culture, healing the rift between the sciences and humanities by communicating and contrasting their values in a way that renders them comprehensible to partisans of either camp . . . Not everything that is true can be proved. Lehrer's quotation from Escoffier is well chosen: "No theory, no formula, and no recipe can take the place of experience." * * Guardian * *
In 1959, C P Snow asserted that there were two cultures in the educated world, the scientific and the artistic, separated by "mutual incomprehension". Books such as Lehrer's show that the border between the two - though still real - is wearing amazingly thin. * * Scotsman * *
Unlike many popularisers of science, Lehrer finds equal and complementary value in our available ways of considering the universe. * * Financial Times * *
Perceptive and skilfully persuasive. * * Times * *
Jonah Lehrer's new book confirms what his fans have known all along - that he knows more about science than a lot of scientists and more about writing than a lot of writers. -- Malcolm Gladwell, author of THE TIPPING POINT and OUTLIERS

Jonah Lehrer is editor at large for Seed magazine and the author of The Decisive Moment: How the Brain Makes Up Its Mind. A graduate of Columbia University and a Rhodes Scholar at Oxford University, Lehrer has worked in the lab of Nobel Prize-winning neuroscientist Eric Kandel. He has written for the New Yorker, Boston Globe, Washington Post, NPR and New Scientist, and writes a highly regarded blog, The Frontal Cortex.

GOR003941873
Proust Was a Neuroscientist by Jonah Lehrer
Jonah Lehrer
Used - Very Good
Paperback
Canongate Books Ltd
2012-04-19
256
0857862316
9780857862310
N/A
Book picture is for illustrative purposes only, actual binding, cover or edition may vary.
This is a used book - there is no escaping the fact it has been read by someone else and it will show signs of wear and previous use. Overall we expect it to be in very good condition, but if you are not entirely satisfied please get in touch with us.