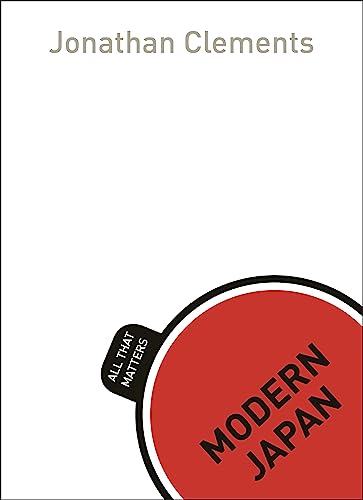 Modern Japan: All That Matters by Jonathan Clements

How has Japan become a global superpower and what does the future look like for it?

Modern Japan: All That Matters by Jonathan Clements

Jonathan Clements charts the rise of Japan since the end of World War Two. Presenting the country as the Japanese themselves see it, he explains key issues in national reconstruction, the often-overlooked US Occupation, the influence of the Cold War, student unrest, political scandals, and the meteoric rise and sudden fall of the Japanese economy in the late 20th century.

He chronicles changes in women's rights and consumer habits, developments in politics, education and health today, and the shadow of nuclear issues from Hiroshima to Fukushima. He also raises topics rarely covered by the foreign media - Japan's ethnic minorities and burakumin underclass, the influence of organised crime and the hard sell behind "soft" power.

A final chapter examines the price Japan has paid for its meteoric rise, the problems of a greying population and a declining countryside, and the long-term implications of the Tohoku earthquake and tsunami.

Jonathan Clements has written many books on Japan, including A Brief History of the Samurai, Anime: A History of Japanese Animation, biographies of Admiral Togo and Prime Minister Saionji Kinmochi, and a collection of haiku translations, The Moon in the Pines. He is the co-author of the Dorama Encyclopedia, a guide to Japanese television since 1953, and the winner of a Japan Festival Award for "outstanding contribution to the understanding of Japanese culture." He is also the author of the Modern China book in the All That Matters series.
GOR006588319
Modern Japan: All That Matters by Jonathan Clements
Jonathan Clements
All That Matters
Used - Very Good
Paperback
Hodder & Stoughton General Division
2014-11-28
160
1473601223
9781473601222
N/A
Book picture is for illustrative purposes only, actual binding, cover or edition may vary.
This is a used book - there is no escaping the fact it has been read by someone else and it will show signs of wear and previous use. Overall we expect it to be in very good condition, but if you are not entirely satisfied please get in touch with us
Trustpilot