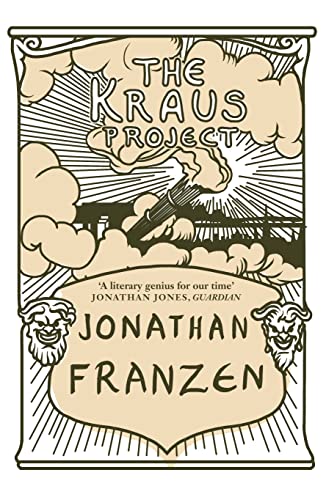 The Kraus Project
by Jonathan Franzen

A great American writer's confrontation with a great European critic - a personal and intellectual awakening.

The Kraus Project by Jonathan Franzen

A great American writer's confrontation with a great European critic - a personal and intellectual awakening.

Recalling his student days, the celebrated author of `The Corrections' and `Freedom' recounts his discovery of Kraus and presents his own translations and annotations of the philosopher's most famous essays.

A pioneer of self-publishing, Kraus brilliantly attacked the mass media and the dehumanizing machinery of technology and capitalism. A notoriously difficult writer, Kraus has met his match in Franzen: a popular novelist unafraid to voice unpopular opinions. In the extensive footnotes Franzen explains why Kraus is relevant today - while also revealing his own intellectual and personal preoccupations.

Painstakingly wrought, strikingly original, `The Kraus Project' is a feast of thought and literature.

From the reviews of The Kraus Project:

`Franzen is still saying something important. Also Kraus can be a joy ... you can understand why Franzen likes him, and he sees a dearth of such elegance today' Sunday Times

`The Kraus Project is tremendously readable and is refreshingly sceptical of the cult of digital cool. Franzen's prose has an appealing briskness and polemical force, quite different in style from the high burnish of his long, deliberative, multi-layered literary novels ... as an exercise in controlled rage and as a celebration of and introduction to Karl Kraus it works just so' Financial Times

Jonathan Franzen was born in 1959 and graduated from Swarthmore College. He has lived in Boston, Spain, New York, Colorado Springs and Philadelphia. His other novels are `The Twenty-Seventh City', `Strong Motion', `The Corrections' and `Freedom'. He is also the author of two collections of non-fiction, `How To Be Alone' and `Farther Away' and `The Discomfort Zone', a memoir. His fiction and non-fiction appear frequently in the `New Yorker' and `Harper's', and he was named one of the best American novelists under forty by `Granta' and the `New Yorker'. He lives in New York City.

GOR007095354
The Kraus Project by Jonathan Franzen
Jonathan Franzen
Used - Very Good
Paperback
HarperCollins Publishers
2014-08-25
336
0007517440
9780007517442
N/A
Book picture is for illustrative purposes only, actual binding, cover or edition may vary.
This is a used book - there is no escaping the fact it has been read by someone else and it will show signs of wear and previous use. Overall we expect it to be in very good condition, but if you are not entirely satisfied please get in touch with us.