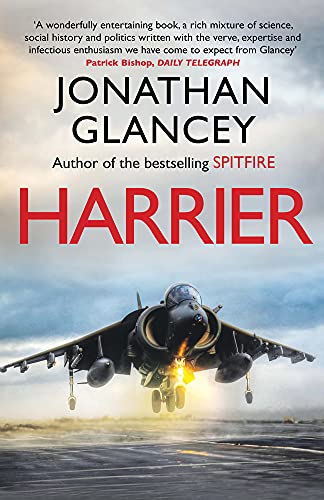 Used Price
$17.49
inc. GST
Free Shipping in Australia
A new and boldly original history of the iconic aircraft, by the bestselling author of Spitfire: The Biography.
Reviews:
Trustpilot
Very Good

The British designed and built the Harrier, the most successful vertical take-off-and-landing aircraft ever made. Combining state-of-the-art fighter plane technology with a helicopter's ability to land vertically the Harrier has played an indispensable role for the RAF and Royal Navy in a number of conflicts, most famously the Falklands War.

Jonathan Glancey's biography is a vividly enjoyable account of the invention of this remarkable aeroplane and a fitting tribute to the inspiration and determination of the men and women who created it, and the bravery of the men who flew it, often in the most dangerous conditions.

A wonderfully entertaining book, a rich mixture of science, social history and politics written with the verve, expertise and infectious enthusiasm we have come to expect from Glancey. Unlike the politicians and the MoD, this man knows what he is doing. -- Patrick Bishop * Sunday Telegraph *
Takes you on a vivid tour through the history of the aircraft and the men and women who created and flew it. * Daily Express *
Honestly and passionately told, this is a powerful tribute to the ingenuity of the Harrier's creators and the courage and skill of those who flew it * Good Book Guide *

Jonathan Glancey is well known as the former architecture and design correspondent of the Guardian and Independent newspapers. He is also a steam locomotive enthusiast and pilot. A frequent broadcaster, his books include Giants of Steam, the bestselling Spitfire: The Biography; Nagaland: A Journey to India's Forgotten Frontier; Tornado: 21st Century Steam; The Story of Architecture and The Train: An Illustrated History.

GOR005789782
Harrier by Jonathan Glancey
Jonathan Glancey
Used - Very Good
Paperback
Atlantic Books
2014-06-05
304
1843548925
9781843548928
N/A
Book picture is for illustrative purposes only, actual binding, cover or edition may vary.
This is a used book - there is no escaping the fact it has been read by someone else and it will show signs of wear and previous use. Overall we expect it to be in very good condition, but if you are not entirely satisfied please get in touch with us.