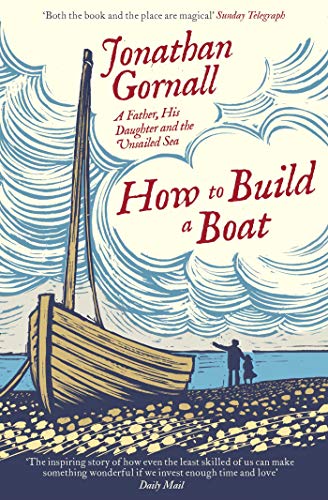 How To Build A Boat
by Jonathan Gornall

In Stock
$18.49
inc. GST
The story of a magical voyage of rediscovery.
Like New Very Good Well Read
Only 3 left

How To Build A Boat Summary

How To Build A Boat: A Father, his Daughter, and the Unsailed Sea by Jonathan Gornall

'Both the book, and place, are magical' The Sunday Telegraph

'When Jonathan Gornall decided to build a boat for his daughter, he had no experience and no practical skills. What followed was a very real labour of love.' The Scotsman


One man learns the ancient skills of boat-building to connect with fatherhood.


How to Build a Boat is the story of a thoroughly unskilled modern man who, inspired by his love of the sea and what it has taught him about life, sets out to build a traditional wooden boat as a gift for his newborn daughter. It is, he recognises, a ridiculously quixotic challenge for a man who, with a family and mortgage to support, knows little about woodworking and even less about boat-building. He isn't even sure what type of boat he should build, what type of wood he should use, the tools he will need or, come to that, where on earth he will build it. He has much to consider, and even more to learn.

But, undaunted by his ignorance, he embarks on a voyage of rediscovery, determined to navigate his way back to a time when a man could fashion his future and leave his mark on history using only time-honoured skills and the ancient tools and materials at hand. The journey begins with a search for clues in the once bustling, but now still, creeks and backwaters of his beloved Suffolk, where men once fashioned the might of Nelson's navy from the great oaks that shadowed the water's edge. If all goes to plan, it will end with a great little adventure, as father and daughter cast off together for a voyage of discovery that neither will forget, and both will treasure until the end of their days.

A writer following in the bestselling footsteps of Adam Nicolson, Tim Moore and Charlie Connelly - discovering what make modern man tick through the discovery of a craft long forgotten.

How To Build A Boat Reviews

`Refreshingly down-to-earth...one can't help admiring the combination of craftsmanship and ambition' * Times Literary Supplement *
'This book tells the inspiring story of how even the least skilled of us can make something wonderful if we invest enough time and love.' * Daily Mail *
'Both the book, and place, are magical.' * Sunday Telegraph *
'When Jonathan Gornall decided to build a boat for his daughter, he had no experience and no practical skills. What followed was a very real labour of love.' * The Scotsman *
'In an age of instant everything, this is a charming book about handcrafting something that does not arrive in a cardboard box and snap together. It is a story about taming impatience, facing fears, and softening skepticism. With love as a motivation, each of us may undertake things that seem impossible.' -- Tori Murden McClure, author of A Pearl in the Storm, President of Spalding University, and the first woman to row across the Atlantic Ocean
'There are few sailing books that a sailor could recommend to anyone, but How to Build a Boat is one of them, a first-person narrative about boatbuilding and fatherhood...moving, funny and perceptive...it is Gornall's biggest achievement to turn a detailed description of building a timber dinghy into a real page-turner.' * Classic Boat *
'The inspiring story of how even the least skilled of us can make something wonderful if we invest enough time and love.' * Irish Daily Mail *
'Beautifully documents the year [journalist Jonathan Gornall] spent building a wooden boat for his young daughter...Owning almost no tools and having no woodworking skills, Gornall, living on England's eastern coast, gave himself a crash course...[His] prose is amusing, personal, and informative...[He] acknowledges he has `created a vessel of a father's love, a gift to inspire his daughter.' The very same can be said of his book, a testament to hard work and a soft heart.' * Publishers Weekly *
'An utterly captivating, richly poetic account of building a traditional wooden boat for the first time - and a paean to the awesome responsibility and reward of fatherhood.' -- Matthew P. Murphy, Editor * WoodenBoat magazine *
'This rich, beautifully crafted book is funny, heart-warming and stuffed to the gunwales with fascinating information. Jonathan Gornall's quest to build a sailing boat navigates the crosscurrents of his life story - the challenges of fatherhood, his difficult relationship with his mother, his lifelong love of the sea. It's a compelling narrative that sweeps us along as Gornall battles his demons while simultaneously tackling the tough physical challenges of building a vessel from scratch.' -- Benedict Tufnell, Editor * Row360 magazine *
'Being a parent, a sailor and an occasional DIYer, I know that boat building, like fatherhood, is not for the faint of heart. Packed with details, both historical and personal, How to Build a Boat wonderfully captures the tensions, the tightrope walk between reward and dismay. In the end, I wanted to cheer: the boat floats and a daughter's adventures can begin.' -- Mark Pillsbury, Editor * Cruising World *
'Engrossing...Gornall's prose is buoyant and watertight and his book shipshape.' * Kirkus Reviews *

Jonathan Gornall is an award-winning freelance journalist, formerly with The Times, who has lived and worked in the Middle East and is now based in the UK. He has twice attempted to row across the Atlantic. On the first occasion he almost lost his mind, on the second his life, and now he's done with all that. His next adventure will be a four-mile circumnavigation of Horsey Island in the Walton Backwaters, which he will attempt with his daughter, Phoebe, when she turns five.

GOR010116590
How To Build A Boat: A Father, his Daughter, and the Unsailed Sea by Jonathan Gornall
Jonathan Gornall
Used - Like New
Paperback
Simon & Schuster Ltd
2019-04-04
320
1471164810
9781471164811
N/A
Book picture is for illustrative purposes only, actual binding, cover or edition may vary.
This is a used book - there is no escaping the fact it has been read by someone else and it will show signs of wear and previous use. Overall we expect it to be in very good condition, but if you are not entirely satisfied please get in touch with us.