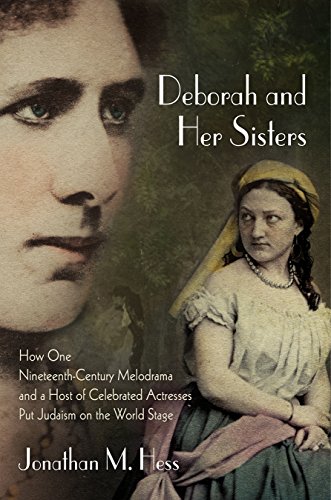 Deborah and Her Sisters
by Jonathan M. Hess

Before Fiddler on the Roof, there was Deborah, a blockbuster melodrama about a Jewish woman forsaken by her non-Jewish lover. Deborah and Her Sisters offers the first comprehensive history of this transnational phenomenon, focusing on its ability to bring Jews and non-Jews together during a period of increasing antisemitism.

Deborah and Her Sisters Summary

Deborah and Her Sisters: How One Nineteenth-Century Melodrama and a Host of Celebrated Actresses Put Judaism on the World Stage by Jonathan M. Hess

Before Fiddler on the Roof, before The Jazz Singer, there was Deborah, a tear-jerking melodrama about a Jewish woman forsaken by her non-Jewish lover. Within a few years of its 1849 debut in Hamburg, the play was seen on stages across Germany and Austria, as well as throughout Europe, the British Empire, and North America. The German-Jewish elite complained that the playwright, Jewish writer S. H. Mosenthal, had written a drama bearing little authentic Jewish content, while literary critics protested that the play lacked the formal coherence of great tragedy. Yet despite its lackluster critical reception, Deborah became a blockbuster, giving millions of theatergoers the pleasures of sympathizing with an exotic Jewish woman. It spawned adaptations with titles from Leah, the Forsaken to Naomi, the Deserted, burlesques, poems, operas in Italian and Czech, musical selections for voice and piano, a British novel fraudulently marketed in the United States as the original basis for the play, three American silent films, and thousands of souvenir photographs of leading actresses from Adelaide Ristori to Sarah Bernhardt in character as Mosenthal's forsaken Jewess.

For a sixty-year period, Deborah and its many offshoots provided audiences with the ultimate feel-good experience of tearful sympathy and liberal universalism. With Deborah and Her Sisters, Jonathan M. Hess offers the first comprehensive history of this transnational phenomenon, focusing on its unique ability to bring Jews and non-Jews together during a period of increasing antisemitism. Paying careful attention to local performances and the dynamics of transnational exchange, Hess asks that we take seriously the feelings this commercially successful drama provoked as it drove its diverse audiences to tears. Following a vast paper trail in theater archives and in the press, Deborah and Her Sisters reconstructs the allure that Jewishness held in nineteenth-century popular culture and explores how the Deborah sensation generated a liberal culture of compassion with Jewish suffering that extended beyond the theater walls.

Deborah and Her Sisters Reviews

"Deborah and Her Sisters presents a new and constructively critical approach to the study of philosemitism and to the study of representations of Jews and Jewishness in general. This is cultural studies at its best-in excavating and interpreting a largely forgotten and demonstrably significant theatrical blockbuster, Jonathan M. Hess forces us to rethink key methodological questions and to reevaluate our understanding of an era."-Martha B. Helfer, Rutgers University

"An exuberant account of the transnational performance history of a forgotten blockbuster, this book sets a new standard for Jewish cultural studies. By carefully reconstructing the contexts in which Jewish and non-Jewish theater audiences came together to cry over a melodramatic tale of Jewish suffering, Jonathan M. Hess reveals the importance of philosemitism to the nineteenth-century liberal imagination."-Maurice Samuels, Yale University

Jonathan M. Hess (1965-2018) was the Moses M. and Hannah L. Malkin Distinguished Professor of Jewish History and Culture and Chair of the Department of Germanic and Slavic Languages and Literatures at the University of North Carolina at Chapel Hill and author of several books, including Middlebrow Literature and the Making of German-Jewish Identity and Germans, Jews and the Claims of Modernity.

GOR009720889
Deborah and Her Sisters: How One Nineteenth-Century Melodrama and a Host of Celebrated Actresses Put Judaism on the World Stage by Jonathan M. Hess
Jonathan M. Hess
Jewish Culture and Contexts
Used - Very Good
Hardback
University of Pennsylvania Press
2017-11-08
272
0812249585
9780812249583
N/A
Book picture is for illustrative purposes only, actual binding, cover or edition may vary.
This is a used book - there is no escaping the fact it has been read by someone else and it will show signs of wear and previous use. Overall we expect it to be in very good condition, but if you are not entirely satisfied please get in touch with us.