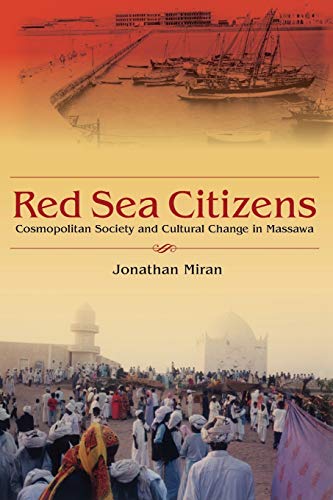 In Stock
$37.99
+10% GST
In the late 19th century, the port of Massawa on the Red Sea was a thriving, vibrant, multiethnic commercial hub. This title tells the story of how Massawa rose to prominence as one of Northeast Africa's important shipping centres. It constructs the social, material, religious, and cultural history of this mercantile community.
Very Good
Only 1 left

In the late 19th century, the port of Massawa, in Eritrea on the Red Sea, was a thriving, vibrant, multiethnic commercial hub. Red Sea Citizens tells the story of how Massawa rose to prominence as one of Northeast Africa's most important shipping centers. Jonathan Miran reconstructs the social, material, religious, and cultural history of this mercantile community in a period of sweeping change. He shows how Massawa and its citizens benefited from migrations across the Indian Ocean, the Arabian peninsula, Egypt, and the African interior. Miran also notes the changes that took place in Massawa as traders did business and eventually settled. By revealing the dynamic processes at play, this book provides insight into the development of the Horn of Africa that extends beyond borders and boundaries, nations and nationalism.

Red Sea Citizens is an excellent, detailed study of this port town at the historical meeting point of the Red Sea, Arabia, the Nile Valley, and the Ehtiopian plateau. . . . This original and thoroughly researched book breaks new ground and makes valuable contributions to a growing field. September, 2011 * African Studies Review *
[The author] has taken an impressive first step toward a Braudelian treatment of the Red Sea as a place of cultural, geographic and socioeconomic cross-pollination.2010 * Saudi Aramco World *
This text is a useful microanalysis for historians in search of biographical accounts of alien residential families from regions as far as Kabul, Bombay, Yemen, Turkey, and Bosnia. . . . Recommended. * Choice *
Red Sea Citizens is a welcome addition to the literature on cultural pluralism ... The book is well-written and meticulously put together ...Vol. 9 2010 * African and Asian Studies *
[This] is a fine book and should encourage similar studies of other Indian Ocean ports in the colonial period. September 2011 * Journal of World History *
. . . this is an important, well-researched, and beautifully illustrated book that deserves to be widely read.Vol. 51, 2010 -- Lidwien Kapteijns * Wellesley College *
[The author] deepens our understanding of...local topics [but] his major contribution lies in the links he draws with much larger historical processes. ...Miran's work admirably illustrates how attention to transregional empires and larger spatial units can recast the problems that animate a field. -- James De Lorenzi * CUNY, John Jay College *
The 'global cities' of the 19th century are increasingly coming to the attention of historians of Africa, Asia, and the Middle East. Jonathan Miran's study of Massawa on the Red Sea coast is a clear example of this orientation and a benchmark to which future studies will have to refer. Vol. 42.4, 2010 * Intl. Journal of Middle East Studies *
This is a rich, brilliantly researched, and intellectually ambitious book that will stimulate further research on the region. . . . In sum, the author must be praised for such a thorough and thought-provoking piece of research. December 2010 * American Historical Review *
After navigating through 300 pages of readable yet well documented thematic narrative supplemented with insightful anecdotes, useful maps, and a glossary, one realizes that Miran delivers on multiple levels. Vol. 43.1, 2010 * International Journal of African Historical Studies *
Jonathan Miran has ... produced a rich, well written and attracting book ... which will surely become a must-read reference for many years to come.Vol. 13 2010 * Aethiopica *
[This book] is a history of the (currently) Eritrean port city of Massawa, focusing on the 19th century but reaching back as far as the 1500s and moving up to the 1920s.... As a long-time lover of Massawa I have learnt a huge amount about the city from this book... that helps us understand Massawa from the perspective of Massawans.Winter 2010/11 * Leeds African Studies Bulletin *

Jonathan Miran is Assistant Professor of Islamic Civilization in the Department of Liberal Studies at Western Washington University.

Introduction: Facing the Land, Facing the Sea
1. Making a Region Between the Sea and the Mountain: Na'ib Autonomy and Dominance, to the 1850s
2. On Camels and Boats: Spaces, Structures and Circuits of Production and Exchange
3. Connecting Sea and Land: Merchants, Brokers, and the Anatomy of a Red Sea Port Town
4. "A Sacred Muslim Island": Sufis, Holy Men, and Town Islam in Massawa and the Interior
5. "Being Massawan": Citizenship, Family, and Urban Authority

GOR010089588
Red Sea Citizens: Cosmopolitan Society and Cultural Change in Massawa by Jonathan Miran
Jonathan Miran
Used - Very Good
Paperback
Indiana University Press
2009-07-06
400
0253220793
9780253220790
N/A
Book picture is for illustrative purposes only, actual binding, cover or edition may vary.
This is a used book - there is no escaping the fact it has been read by someone else and it will show signs of wear and previous use. Overall we expect it to be in very good condition, but if you are not entirely satisfied please get in touch with us.