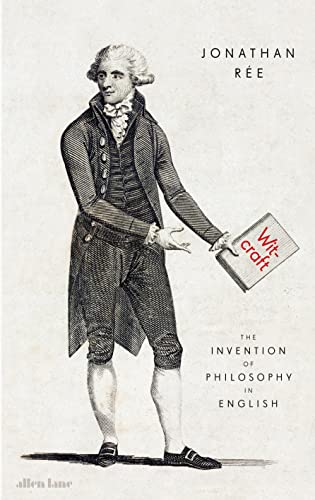 Witcraft: The Invention of Philosophy in English by Jonathan Ree

'We English men have wits,' wrote the clergyman Ralph Lever in 1573, and, 'we have also framed unto ourselves a language.'

Witcraft is a fresh and brilliant history of how philosophy became established in English. It presents a new form of philosophical storytelling and challenges what Jonathan Ree calls the 'condescending smugness' of traditional histories of philosophy. Ree tells the story of philosophy as it was lived and practised, embedded in its time and place, by men and women from many walks of life, engaged with the debates and culture of their age. And, by focusing on the rich history of works in English, including translations, he shows them to be quite as colourful, diverse, inventive and cosmopolitan as their continental counterparts.

Witcraft offers new and compelling intellectual portraits not only of celebrated British and American philosophers, such as Hume, Emerson, Mill and James, but also of the remarkable philosophical work of literary authors, such as William Hazlitt and George Eliot, as well as a carnival of overlooked characters - priests and poets, teachers, servants and crofters, thinking for themselves and reaching their own conclusions about religion, politics, art and everything else.

The book adopts a novel structure, examining its subject at fifty-year intervals from the sixteenth century to the twentieth. Researched over decades and illuminated by quotations from extensive archival material, it is a book full of stories and personalities as well as ideas, and shows philosophy springing from the life around it. Witcraft overturns the established orthodoxies of the history of philosophy, and celebrates the diversity, vitality and inventiveness of philosophical thought.

Ree spans a vast ocean of ideas. He introduces us to their shapers and breakers, and gently captains us in 50-year stretches across the seas of English-language thought with astonishing skill as both map-maker and way-finder ... enjoy its riches slowly, and savour every generous, erudite and undogmatic page. -- Boyd Tonkin * Financial Times *
Ree traces the history of English philosophy from 1601 to 1951, making periodic 50-year leaps to follow the story a couple of generations on. This structure allows him to make connections that the conventional histories of philosophy seldom can ... dead philosophers, and indeed dead philosophies, here feel alive, and integrated with the rest of history -- Nakul Krishna * Daily Telegraph *
Witcraft complicates the familiar narrative of philosophy. Rather than whisking us from one prominent philosophical peak to another, it spends a lot of time wandering the fertile valleys between them ... Ree's book is stylish and entertaining. -- Terry Eagleton * Guardian *
Ree's book may well be the most fun we've ever had with anglophone philosophy ... an intellectual adventure story in which the usual suspects all figure, but get sidelined by his heroes - the oddballs, underdogs and outcasts, many of them women, some of them scary decapitators, who were obliged to operate outside the patriarchal, class-bound academy. -- Stuart Jeffries * Spectator *
Ree, one of Britain's best-known living philosophers ... has delivered an impressive reimagining of what a history of philosophy ought to be. -- Alex Dean * Prospect *
This book is a game-changer. It fills a giant hole that we did not know was there. We will never be able to think of English philosophy in quite the same way again. -- Professor David Wood
Witcraft is the story of philosophy in English told in a new way, narrated with relish and considerable wit -- Jonathan Egid * Times Literary Supplement *
He offers a history of ideas that is about history and not just ideas. We get a sense of the excitement of philosophical conversation in its social context -- Daniel Callcut * New Humanist *
belongs on the small shelf of genuinely readable histories of philosophy which are also not over-simplified into intellectual caricature... He keeps before the reader the historical accidents which inform the development of philosophical thinking: in fact, the history of philosophy is the history of thoughtful humans bumbling after wisdom, not the history of reason fatefully working itself out in an inevitable progression..... This is a great book, and it deserves infinitely more clamorous applause than it has yet received * Robert Minto *

Jonathan Ree is a freelance philosopher and historian. His previous books include Philosophical Tales, Proletarian Philosophers and I See a Voice.

GOR009980171
Witcraft: The Invention of Philosophy in English by Jonathan Ree
Jonathan Ree
Used - Very Good
Hardback
Penguin Books Ltd
2019-05-30
768
0713999330
9780713999334
N/A
Book picture is for illustrative purposes only, actual binding, cover or edition may vary.
This is a used book - there is no escaping the fact it has been read by someone else and it will show signs of wear and previous use. Overall we expect it to be in very good condition, but if you are not entirely satisfied please get in touch with us.