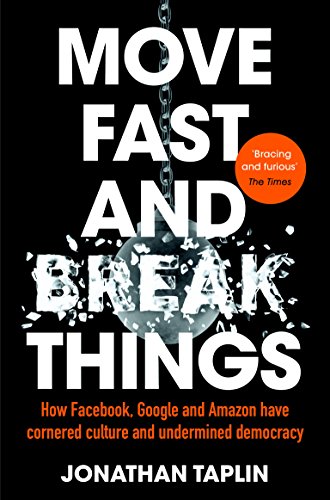 In Stock
$21.49
inc. GST
Fake news. Digital monopolies. Stealth Marketing. This is the story of how the internet, which began as a dream, has become a nightmare.
Very Good
Only 4 left

Move Fast and Break Things: How Facebook, Google and Amazon Have Cornered Culture and Undermined Democracy by Jonathan Taplin

A Financial Times 'Best Thing I Read This Year'

LONGLISTED FOR THE FT & MCKINSEY BUSINESS BOOK OF THE YEAR AWARD

Google. Amazon. Facebook. The modern world is defined by vast digital monopolies turning ever-larger profits. Those of us who consume the content that feeds them are farmed for the purposes of being sold ever more products and advertising. Those that create the content - the artists, writers and musicians - are finding they can no longer survive in this unforgiving economic landscape.

But it didn't have to be this way.

In Move Fast and Break Things, Jonathan Taplin offers a succinct and powerful history of how online life began to be shaped around the values of the entrepreneurs like Peter Thiel and Larry Page who founded these all-powerful companies. Their unprecedented growth came at the heavy cost of tolerating piracy of books, music and film, while at the same time promoting opaque business practices and subordinating the privacy of individual users to create the surveillance marketing monoculture in which we now live.

It is the story of a massive reallocation of revenue in which $50 billion a year has moved from the creators and owners of content to the monopoly platforms. With this reallocation of money comes a shift in power. Google, Facebook and Amazon now enjoy political power on par with Big Oil and Big Pharma, which in part explains how such a tremendous shift in revenues from creators to platforms could have been achieved and why it has gone unchallenged for so long.

And if you think that's got nothing to do with you, their next move is to come after your jobs.

Move Fast and Break Things is a call to arms, to say that is enough is enough and to demand that we do everything in our power to create a different future.

Taplin wields his axe mercilessly...by the end of this book you will agree with Taplin that the tech firms are abusing their monopoly power to rip us off and debase our culture - breaking the world as he sees it...It is time for consumers to break back. This manifesto is a punchy start. * The Sunday Times *
A bracing, unromantic account of how the internet was captured...Move Fast and Break Things is a timely and useful book * The Observer *
Taplin is angry as hell about the immense size and power of the tech giants, and has a compelling pitch for why we should all be worried too * The Evening Standard *
Comprehensive...Where Taplin excels is by putting all this into the context of the changing global economy * The Times *
A new analysis of the dark side of the digital revolution...Taplin goes beyond familiar critiques * Financial Times *
Taplin's sense of outrage is palpable and his case is often compelling * The Guardian *
A radical remedy * The Economist *
A nuanced look at the downside of what is glibly tossed around as "disruption" by various cyber-messianic blowhards. Taplin is hunting big game; it is his contention that the giants of the cyberworld-from Google to Amazon-are threats to the fundamental foundations of democracy and that they also cement inequality into our systems in new and dangerous ways * Esquire *
Jonathan Taplin's Move Fast and Break Things argues that the radical libertarian ideology and monopolistic greed of many Silicon Valley entrepreneurs helped to decimate the livelihoods of musicians and is now undermining the communal idealism of the early internet * Walter Isaacson, New York Times Book Review *
Mr Taplin brings an informed perspective to his task * Wall Street Journal *
Jonathan Taplin's new book could not be more timely. Twenty years after the initial euphoria of the Web, ten years after the invention of social media, it's time to stop breaking things and start thinking seriously about the new habitat we're creating. Move Fast and Break Things provides a blueprint for a future that humans can live in * Frank Rose, author of The Art of Immersion *
Move Fast and Break Things goes on my bookshelf beside a few other indispensable signposts in the maze of life in the 21st Century--The Technological Society by Jacques Ellul, The Image by Daniel Boorstin, The Work of Art in the Age of Mechanical Reproduction by Walter Benjamin, The Medium is the Message by Marshall McLuhan, The Media Monopoly by Ben Bagdikian, Christ and the Media by Malcolm Muggeridge, and Future Shock by Alvin Toffler. I pray the deepest and highest prayer I can get to that this clarion warning is heeded. The survival of our species is at stake * T Bone Burnett, Oscar-Winning Songwriter, soundtrack and record producer *
Jonathan Taplin's Move Fast and Break Things, a rock and roll memoir cum internet history cum artists' manifesto, provides a bracing antidote to corporate triumphalism - and a reminder that musicians and writers need a place at the tech table and, more to the point, a way to make a decent living * Jeffrey Toobin, author of American Heiress *
A powerful argument for reducing inequality and revolutionizing how we use the Web for the benefit of the many rather than the few * Kirkus Review *
Jonathan Taplin, more than anyone I know, can articulate the paralyzing complexities that have arisen from the intertwining of the tech and music industries. He counters the catastrophic implications for musicians with solutions and inspiration for a renaissance. He shows the way for artists to reclaim and reinvent subversion, rather than be in servitude to Big Tech. Every musician and every creator should read this book. * Rosanne Cash, Grammy-winning Singer and Songwriter *
An absolute must-read for anyone who wants to gain a little savvy in the internet era * Newsweek *
Insightful.... Taplin provides a keen, thorough look at the present and future of Americans' lives as influenced and manipulated by the technological behemoths on which they've come to depend. His work is certainly food for thought * Publishers Weekly *
A breakthrough, must-read book... a tour de force-a compelling, story-driven work focusing on the handful of men who have shaped and essentially taken over the massive tech industry. Along the way, Taplin tells his own personal story with charm and insight. If you want to understand what has happened to our country and where tech will take us in the era of Trump, put aside some time to read this book. It will take your breath away * Alternet *
Jonathan Taplin's excellent new book explains exactly how Google, Facebook and Amazon are undermining democratic institutions, accelerating the rise of oligarchy...and destroying both cultural and economic opportunities for millions of people. * The Chicago Tribune *

Jonathan Taplin is Director of the Annenberg Innovation Lab and a former tour manager for Bob Dylan and The Band, as well as a film producer for Martin Scorsese. An expert in digital media entertainment, Taplin is a member of the Academy Of Motion Picture Arts and Sciences and sits on the California Broadband Taskforce and Los Angeles Mayor Eric Garcetti's Council on Technology and Innovation.

GOR009232953
Move Fast and Break Things: How Facebook, Google and Amazon Have Cornered Culture and Undermined Democracy by Jonathan Taplin
Jonathan Taplin
Used - Very Good
Paperback
Pan Macmillan
2018-03-22
320
1509847707
9781509847709
Long-listed for Financial Times and McKinsey Business Book of the Year 2017 (UK)
Book picture is for illustrative purposes only, actual binding, cover or edition may vary.
This is a used book - there is no escaping the fact it has been read by someone else and it will show signs of wear and previous use. Overall we expect it to be in very good condition, but if you are not entirely satisfied please get in touch with us.