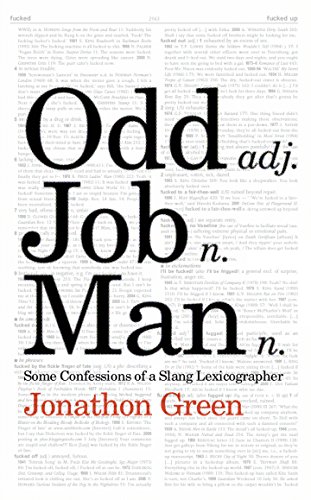 Used Price
$17.49
inc. GST
Free Shipping in Australia
For thirty years Jonathon Green has been collecting slang - the indefinable language of the gutter, the brothel, the jail, the barroom - producing a succession of dictionaries, most recently the three-volume Green's Dictionary of Slang, that have been recognised as the most comprehensive and authoritative ever compiled.
Very Good

Odd Job Man: Some Confessions of a Slang Lexicographer by Jonathon Green

For thirty years Jonathon Green has been collecting slang - the indefinable language of the gutter, the brothel, the jail, the barroom - producing a succession of dictionaries, most recently the three-volume Green's Dictionary of Slang, that have been recognised as the most comprehensive and authoritative ever compiled. In this fascinating memoir Green reveals that he first began collecting slang in the 1970s, noticing that the contemporary authorities (notably Eric Partridge) preferred the past to the present, unaware of the huge array of new slang being coined by the counter-culture. He ponders why he still does this strange, lonely job, exploring the satisfaction that can be gained by tracking down the first use of a term just encountered in one of the cheap dime novels he devours for research. The lexis leans towards pimping and prostitution, crime and imprisonment, violence and cruelty, drunken and drugged debauches: what does this say about the man who spends every day truffling for it? A fascinating look at how one man has built a lexis of 125,000 words that includes 1,740 words for sexual intercourse, 1,351 for the penis, 540 for defecation/urination, 247 for fat, 219 for vomiting and 180 for anal sex, Odd Job Man will delight all those who love the words that the conventional dictionaries leave out.

"In his relentless campaign to drag slang out of the sewer and brothel, and into the drawing-room and academy, Green has no rival. He is the Dr Johnson of slang, its Putin, its Mr Toad, its Dickens." -- Nicholas Shakespeare * Sunday Telegraph *
"[Green's] kaleidoscopic memoir charting three decades exploring our mother tongue's more exotic margins is vigorous, gonzoid, learned and entertaining." -- David Profumo * Literary Review *
"This memoir of a life spent exploring the grubby margins of the English language reveals plenty about both that language and Green himself." * Spectator *
"[A] rollicking memoir." -- Iain Finlayson * Saga *
"Unusual... Moving... Magnificent." -- Sam Leith * Guardian *

Jonathon Green is the author of the Cassell Dictionary of Slang (1998) and Green's Dictionary of Slang (2010), for which he was awarded the 2012 Dartmouth Medal for the most outstanding reference work of the year. He has also written a history of lexicography, Chasing the Sun (1996), the legendary oral history of the British counterculture, Days in the Life (1988), several other oral histories and All Dressed Up: The Sixties and the Counterculture (1998). He lives in London and Paris.

GOR006011800
Odd Job Man: Some Confessions of a Slang Lexicographer by Jonathon Green
Jonathon Green
Used - Very Good
Hardback
Vintage Publishing
2014-04-03
336
022409758X
9780224097581
N/A
Book picture is for illustrative purposes only, actual binding, cover or edition may vary.
This is a used book - there is no escaping the fact it has been read by someone else and it will show signs of wear and previous use. Overall we expect it to be in very good condition, but if you are not entirely satisfied please get in touch with us.