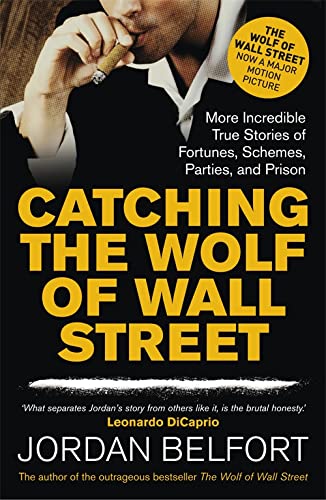 Catching the Wolf of Wall Street
by Jordan Belfort

In the 1990s Jordan Belfort became one of the most infamous names in American finance: a brilliant, conniving stock-chopper. He was THE WOLF OF WALL STREET, whose life of greed, power and excess was so outrageous it could only be true; no one could make this up! But the day Jordan was arrested and taken away in handcuffs was not the end of the madness.
Catching the Wolf of Wall Street tells of what happened next. After getting out of jail on $10 million bail he had to choose whether to plead guilty and act as a government witness or fight the charges and see his wife be charged as well. he cooperated.
With his trademark brash, brazen and thoroughly unputdownable storytelling, Jordan details more incredible true tales of fortunes made and lost, money-making schemes, parties, sex, drugs, marriage, divorce and prison.

PRAISE FOR THE WOLF OF WALL STREET

'What separates Jordan's story from others like it, is the brutal honesty.' - Leonardo DiCaprio
'Raw and frequently hilarious.' - The New York Times
'Reads like a cross between Tom Wolfe's Bonfire of the Vanities and Scorsese's Goodfellas ... Laugh-out funny.' - The Sunday Times

What separates Jordan's story from others like it, is the brutal honesty. * Leonardo DiCaprio *
Still a hustler, still a salesman - and also a hell of a writer. * Kirkus reviews *
spankingly candid insights into sex, drugs and rocky stockbroking. * GQ Australia *
Salacious reading. * The Star-Ledger *

Jordan Belfort was born in Queens, New York. He hustled ices to put himself through college, showing early entrepreneurial flair. His first business sent him bankrupt at twenty-four so he went down to Wall St with $100 in his pocket and ended up building one of the largest brokerages in America - the now infamous Stratton Oakmont. A hard partying lifestyle ended in crash and burn. Ultimately indicted by the federal government, Belfort served twenty-two months in prison, and time in rehab. He's now a highly successful motivational speaker. His story has been made into a Golden Globe-winning and Academy Award-nominated film starring Leonardo DiCaprio and directed by Martin Scorsese. He is currently living in Los Angeles.

GOR005509134
Catching the Wolf of Wall Street: More Incredible True Stories of Fortunes, Schemes, Parties, and Prison by Jordan Belfort
Jordan Belfort
Used - Very Good
Paperback
Hodder & Stoughton General Division
2013-10-24
480
1444786830
9781444786835
N/A
Book picture is for illustrative purposes only, actual binding, cover or edition may vary.
This is a used book - there is no escaping the fact it has been read by someone else and it will show signs of wear and previous use. Overall we expect it to be in very good condition, but if you are not entirely satisfied please get in touch with us.