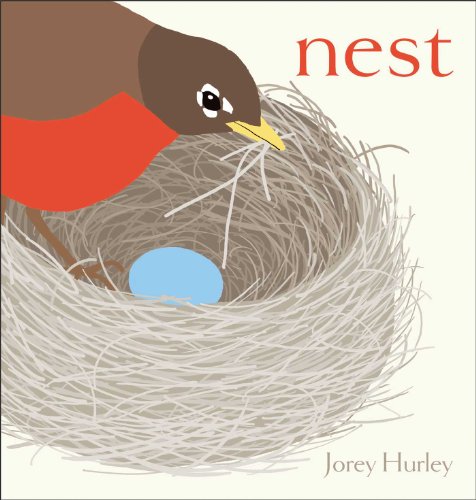 Used Price
$24.99
inc. GST
Free Shipping in Australia
In her picture book debut, artist Jorey Hurley opens our eyes to the wonders of the natural world and tells a universal story of family.
Very Good

In her picture book debut, artist Jorey Hurley opens our eyes to the wonders of the natural world and tells a universal story of family.

From birth, to first flight, to new friend, the first year of a bird's life is full of activity and wonder. Artist Jorey Hurley pairs vivid, crisp artwork with simple, minimal text-often just one word per spread-to create a breath-taking, peaceful chronicle of nature and life's milestones.

Newcomer Hurley lets her bright, clean illustrations do her storytelling, limiting the text on each page to a single, evocative word. The first spread-"nest"-accompanies two robins guarding a precious blue egg. Like silk-screened images, Hurley's digitally created artwork represents the birds and the trees they live in with flat, sharply delineated areas of color on matte pages; airy white space in the compositions duplicates the freedom in which the birds live and soar. Although the forms are stripped down, some small details are preserved, like the intricately woven twigs of the nest and the sparks of light in the birds' eyes. "Grow" shows the robins bringing worms to their nestling amid a bower of blossoms; throughout, Hurley celebrates the changing seasons. Although it suggests itself as a bedtime book, the arc of the story is not day moving into night, and the page that says "sleep" is not the last one-with an "Awake," the next spread shows the rising sun. Robins meet other robins and start again where they began: "Nest." A handsome, disciplined debut. Ages 3-7. * Publishers Weekly *
Nest

Written and illustrated by Jorey Hurley

In this stunning debut, we meet a pair of robins and their egg. We watch the parents incubate and hatch the egg and teach the baby bird to survive and fly. Seasons change, colors change. The family faces danger, but ultimately finds safety and comfort. This story is told primarily through the crisp illustrations that have a light, airy quality. The narrative includes only fifteen words, one on each spread, which adds to the dramatic impact: "Nest...warm...hatch....grow...jump...." The conceptual space between each page turn invites readers to thread together the story and imagine each step in the bird's journey. The illustrations evoke the eloquent simplicity of a Japanese woodblock print while the frontispiece depicts clusters of robin's eggs, reminiscent of clouds in a Georgia O'Keefe painting. Every page resonates with a vision that is both ethereal and quotidian. The birds are depicted naturalistically and an author's note includes factual information about robins and their nests. Nest's beauty and originality will stand up to countless re-readings. * School Library Journal, *STARRED *

Jorey Hurley studied art history at Princeton, received her law degree at Stanford, and studied design at FIT. She worked as a textile designer for Hable Construction in New York City and is now based in San Francisco, where she lives with her husband and their two small children. Nest, her debut, was called "stunning" in a starred review from School Library Journal. Fetch, her second book, was called a "delight" by Publishers Weekly in a starred review. She is also the author of Every Color Soup and Skyscraper. Visit her at JoreyHurley.com.

GOR009886965
Nest by Jorey Hurley
Jorey Hurley
Used - Very Good
Hardback
Simon & Schuster
2014-03-13
40
1442489715
9781442489714
N/A
Book picture is for illustrative purposes only, actual binding, cover or edition may vary.
This is a used book - there is no escaping the fact it has been read by someone else and it will show signs of wear and previous use. Overall we expect it to be in very good condition, but if you are not entirely satisfied please get in touch with us.