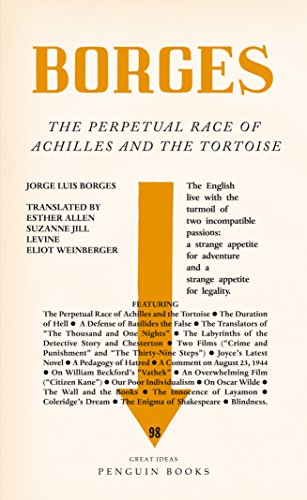 In Stock
$12.99
+10% GST
A collection of essays that discusses the existence (or non-existence) of Hell, the flaws in English literary detectives, the philosophy of contradictions, and the many translators of "1001 Nights". It examines the very nature of our lives, from cinema and books to history and religion.
Very Good Well Read
7 in stock

The Perpetual Race of Achilles and the Tortoise Summary

In this collection of wise, witty and fascinating essays, Borges discusses the existence (or non-existence) of Hell, the flaws in English literary detectives, the philosophy of contradictions, and the many translators of 1001 Nights. Varied and enthralling, these pieces examine the very nature of our lives, from cinema and books to history and religion.

GREAT IDEAS. Throughout history, some books have changed the world. They have transformed the way we see ourselves - and each other. They have inspired debate, dissent, war and revolution. They have enlightened, outraged, provoked and comforted. They have enriched lives - and destroyed them. Now Penguin brings you the works of the great thinkers, pioneers, radicals and visionaries whose ideas shook civilization and helped make us who we are.

Borges was born in Buenos Aires in 1899. A poet, critic and short story writer, he received numerous awards for his work including the 1961 International Publisher's Prize (shared with Samuel Beckett). He died in 1986. He has a reasonable claim, with Kafka and Joyce, to be the most influential writer of the 20th Century.

GOR002653774
The Perpetual Race of Achilles and the Tortoise by Jorge Luis Borges
Jorge Luis Borges
Penguin Great Ideas
Used - Very Good
Paperback
Penguin Books Ltd
2010-08-26
144
0141192941
9780141192949
N/A
Book picture is for illustrative purposes only, actual binding, cover or edition may vary.
This is a used book - there is no escaping the fact it has been read by someone else and it will show signs of wear and previous use. Overall we expect it to be in very good condition, but if you are not entirely satisfied please get in touch with us.