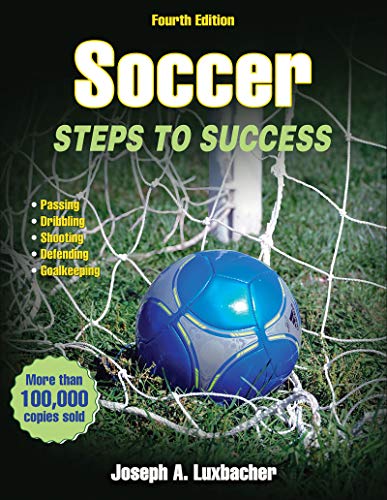 Soccer by Joseph A. Luxbacher

A guide that provides step-by-step instruction on how to learn and become proficient in individual footballing techniques and team tactics. It describes how and when to apply those skills in game situations, such as winning individual onfield battles, attacking and defending.

Soccer: Steps to Success by Joseph A. Luxbacher

Improve your abilities in dribbling, passing, receiving, shooting, defending, tackling, heading, and goalkeeping with the help of detailed descriptions and full-color photos and illustrations of all fundamental techniques. Then learn how and when to apply those skills in game situations, such as winning one-on-one matchups, attacking, and defending. More than 180 exercises and small-sided games test your readiness to progress to the next step through the use of an easy-to-follow scoring system.

Become a total player able to perform a variety of skills and execute tactics consistently. One of the sport's most popular resources, Soccer: Steps to Success has helped more than 100,000 players take their game to the next level.

"Coach Luxbacher's Soccer: Steps to Success is a comprehensive, easy-to-follow resource for coaches of all levels. This book is a must-have!"

"Using his vast knowledge of soccer, Joe has produced an excellent book for both coaches and players."

Joe Luxbacher, PhD, has more than 30 years of experience playing and coaching soccer at all levels. An expert in the fields of health, fitness, and competitive athletics, he holds a doctorate in health and physical and recreation education. A former professional and collegiate soccer player, he has played in the North American Soccer League, American Soccer League, and Major Indoor Soccer League. He currently serves as the head men's soccer coach at the University of Pittsburgh, a position he has held since 1984. His teams have won more than 200 games at the Division I level.

Widely respected by soccer coaches and players alike, Luxbacher has twice been named Big East Conference Soccer Coach of the Year. He has also earned an A coaching license from the United States Soccer Federation. Luxbacher was inducted into the Beadling Sports Club Hall of Fame in 1995, the Upper St. Clair High School Athletic Hall of Fame in 2002, and the Western Pennsylvania Sports Hall of Fame in 2005. He was also honored in 2003 when he was selected as a University of Pittsburgh Letterman of Distinction.

Luxbacher is the founder and director of coaching for Shoot to Score Soccer Academy, an organization that offers educational camps, clinics, and tournaments to players ages 7 to 18. Hundreds of young soccer players participate in Shoot to Score programs each year. He has also written and produced the DVD series Winning Soccer in association with SportVideos.com.

Step 5 Shooting to Finish the Attack

Step 8 Attacking As a Group

Step 9 Defending As a Group

Step 10 Attacking As a Team

Step 11 Defending As a Team

GOR009899999
9781450435420
1450435424
Soccer: Steps to Success by Joseph A. Luxbacher
Joseph A. Luxbacher
STS (Steps to Success Activity
Used - Very Good
Paperback
Human Kinetics Publishers
2013-09-04
272
N/A
Book picture is for illustrative purposes only, actual binding, cover or edition may vary.
This is a used book - there is no escaping the fact it has been read by someone else and it will show signs of wear and previous use. Overall we expect it to be in very good condition, but if you are not entirely satisfied please get in touch with us
Trustpilot