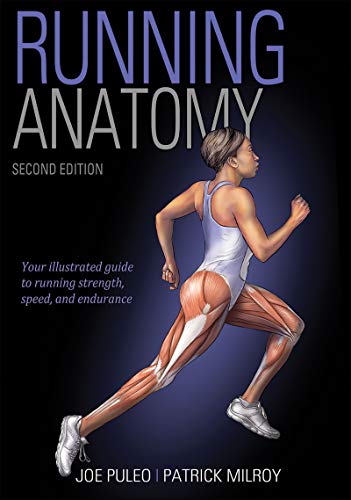 Running Anatomy
by Joseph A. Puleo

Running Anatomy by Joseph A. Puleo

See how to improve your running strength, speed, and endurance with Running Anatomy, Second Edition. This new edition of the best-selling running guide delivers more exercises, more insight, and more illustrations to show you how to increase your muscle strength, optimize the efficiency of your running motion, and minimize your risk of injury.

Running Anatomy features 48 of the most effective strength exercises for runners, each with clear step-by-step descriptions and full-color anatomical illustrations highlighting the muscles in action. Each illustration helps you better understand how muscles, ligaments, and tendons all work together as your body moves.

Running Anatomy clearly links each exercise to running performance. You'll see how to strengthen specific muscles and improve gait efficiency for faster times and more fluid runs. Plus you'll learn how to eliminate anatomical imbalances that can lead to the most common injuries that runners face, including plantar fasciitis, lower-back pain, knee aches and strains, and torn muscles and tendons.

Feel prepared for any challenge that comes your way. You'll find variations to train for every condition and competition-for various terrains, speeds, elevations, and distances, from sprint to marathon. You'll also learn how new gear and technology-enhanced equipment can maximize your training and performance.

Whether you're a fitness runner looking to conquer hills with more speed and strength or a competitive runner looking for that extra edge in performance and a finishing kick, Running Anatomy will ensure that you're ready to achieve your personal best.

"As a physician, exercise scientist, and masters athlete, I've come to recognize the critical importance of strength training in maximizing performance. Running Anatomy lays the groundwork for proper strength, cardiovascular, and mental training for runners of all abilities. If you're a runner looking to reach your full potential, you need to read this book."

"I cannot overstate the impact Joe Puleo has had on my running career. One of the biggest challenges as an amateur elite runner is the workload balance between training and managing a career as an active-duty Marine, all while holding off injuries. Puleo's knowledge and advocacy for strength training have been force multipliers in allowing me to run fewer miles, train smarter, and continually push my boundaries as a distance runner. This book is a great addition to any athlete's library."

About Joseph A. Puleo

Joe Puleo has been coaching distance running and track and field for 28 years. He has been the head coach for men's and women's cross country and track and field at Rutgers University at Camden, where he produced 10 Division III All-Americans, including two individual national champions. Simultaneously, he spent a decade coaching the USMC's All-Marine running program, where he coached three CISM World Championship teams for the United States Armed Forces (marathon and cross country).

Mr. Puleo is the coauthor of the articles "Anteriorly Rotated Pelvis: The Negative Effects for a Distance Runner" and "Anatomy of Running Footwear," which appeared in Techniques magazine. He is a frequent contributor to articles that have appeared in Runner's World and other fitness publications. His first album of songs, A Life I Knew, written for the band Bannister Effect, is scheduled for release in the fall of 2018. His debut novel will be published in spring 2019.

Patrick Milroy has been the chief medical officer for the Road Runners Club in Great Britain since 1998. From 1991 to 2007, he was a medical advisor and contributor to Runner's World, and for 10 years before he was similarly involved with its precursors, Jogging magazine and Running magazine.

Dr. Milroy received the award of fellow from the Institute of Sports Medicine in 1999 and from the UK Faculty of Sport and Exercise Medicine in 2006. He has served as a medical officer for many athletic events-including the World Half Marathon Championships, Team England Commonwealth Games (four times), and British Athletics Federation-and was medical officer for the Great Britain team at the World Junior Championships (three times) and European Junior Championships (two times).

Dr. Milroy is the author of Sports Injuries, coauthor of the AAA Runner's Guide, and author of numerous other articles on sport and exercise topics for journals, magazines, and newspapers. He is also an accomplished runner: winner of the World Medical Games 5,000 meters event and half marathon in 1980, 1982, and 1984 and winner of the European Medical Games 20K, 5K, and 1,500 meters events in 1983. His personal best in the marathon is 2 hours and 26 minutes. At the age of 65, he cycled from Los Angeles to Boston (3,300 miles) in 35 days.

He lives in Chester, United Kingdom, with his wife, Clare, near to his four children and five grandchildren.

Chapter 1. The Runner in Motion

Chapter 8. Chest and Back

GOR009931796
Running Anatomy by Joseph A. Puleo
Joseph A. Puleo
Anatomy
Used - Very Good
Paperback
Human Kinetics Publishers
2018-05-09
200
1492548294
9781492548294
N/A
Book picture is for illustrative purposes only, actual binding, cover or edition may vary.
This is a used book - there is no escaping the fact it has been read by someone else and it will show signs of wear and previous use. Overall we expect it to be in very good condition, but if you are not entirely satisfied please get in touch with us.