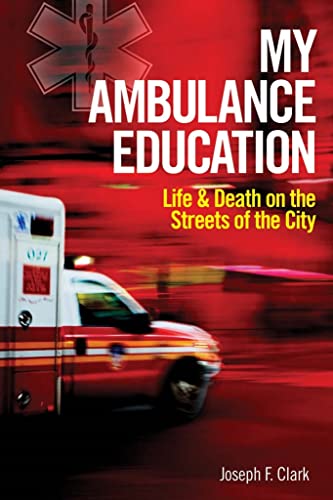 The brutally honest story of an emergency medical technician.

At 18, Joseph Clark started working as an ambulance attendant to pay his way through college. For the next seven years he worked New York City's most dangerous neighborhoods as an emergency medical technician (EMT), dealing with the medical emergencies from drug overdoses, gang fights, car crashes and worse, all while juggling schoolwork and a personal life.

His stories are a graphic portrayal of the life of an ambulance EMT. From dealing with a body that is frozen solid and trapped under a front porch to climbing into the burned-out wreck of a car to treat the seriously injured driver, Clark's stories are horrifying, poignant, touching and often filled with the dark humor that is so characteristic of the people who work under extreme stress.

My Ambulance Education is a testament to the medical first responders who scramble to provide the on-the-spot care so vital to the survival of victims. EMTs struggle daily (and nightly) with emotional strain, sleep deprivation and, inevitably, burnout.

Clark carries the reader along his emergency ride of screaming sirens, gunshots and bloody messes... The stories are not a list of Clark's experiences but a continuous, flowing story. This is what makes the book so good... [It] gives us an appreciation for the efforts of the emergency medical services and is an eye-opener to the everyday things we don't think about that help or hamper [them]... A very good read in itself and a must-read for anyone with at least a small interest in the medical profession.-- (05/18/2009)
This one gets nine stars. It was a nice read--fascinating, fast moving, and very well written. It had the feel of House's Wilson in an ambulance. The book was immediately engrossing and tastefully dealt with potentially icky experiences while still being refreshingly honest. The author is also the Dean Koontz of memoir writers - successfully blending the horror of the job with humor. This is definitely recommended for medical drama fans.-- (09/10/2009)
A "distillation of eight years in three ambulances and two emergency rooms," this energized, gruesome collection of true tales comes from a University of Cincinnati neurologist who cut his teeth as an emergency medical technician (EMT). This faithful memoir of life in the ambulance lane and the characters who populate it -- "unbridled heroes... losers with whom no one wanted to work" -- contains its share of poignant moments, but is far from sentimental; at 18, Clark had to grow, quickly. a strong sense of gallows humor to deal with the gore and mortality. The author's remarks that "you can't have a conversation with [an EMT]...without hearing about blood, guts, vomit or death;" accordingly, the holy trinity of blood, vomit and feces is invoked on nearly every page. Stories about suicide attempts, strokes and gang violence abound, and unsurprisingly, it eventually becomes too much for Clark, who burns out (like so many of his colleagues) trying to do the right thing. Occasionally clunk writing and a listless romantic subplot distract, but readers with the stomach for it will be drawn in by this high-speed, adrenaline-powered ride-along.-- (04/01/2009)
My Ambulance Education is a lot like that accident on the highway: you want to look, but you don't want to see. That's because this is a darn good memoir, but the graphically gruesome, stomach-clenching tales might mean trouble for delicate readers. Clark doesn't candy-coat anything and his stories are often blunt, yet respectful. He's particularly gracious to colleagues in the fire and police departments and the Emergency Departments to which he transports patients.... In the end, Clark is honest about why he got out of the biz, but he clearly doesn't regret his time spent in the back of a rig. Despite the blood-and-guts -- can I warn you enough? -- I liked this book a whole lot and I think you will, too.-- (06/21/2009)

Joseph F. Clark, PhD, is a scientist, researcher and faculty member in the University of Cincinnati's Department of Neurology, specializing in the causes and treatments of stroke. The author or coauthor of numerous articles in scientific journals and three scientific textbooks, he lives in Cincinnati, Ohio.

GOR006745219
My Ambulance Education by Joseph F. Clark
Joseph F. Clark
Used - Very Good
Paperback
Firefly Books Ltd
2009-01-01
264
1554074479
9781554074471
N/A
Book picture is for illustrative purposes only, actual binding, cover or edition may vary.
This is a used book - there is no escaping the fact it has been read by someone else and it will show signs of wear and previous use. Overall we expect it to be in very good condition, but if you are not entirely satisfied please get in touch with us.