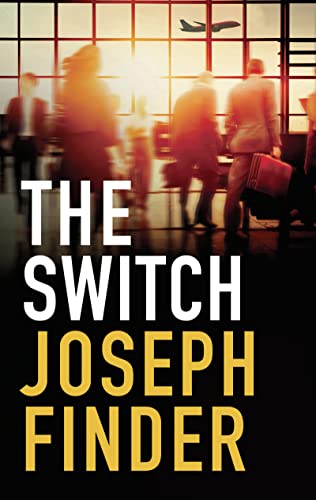 The Switch
by Joseph Finder

Michael Tanner is heading home when he accidentally picks up the wrong laptop from security. The owner is US senator Susan Robbins, and her laptop contains top secret files that should never be on there in the first place. And Senator Robbins is not the only one who wants the laptop back... Suddenly, Tanner is a hunted man.

The Switch by Joseph Finder

One of the Guardian's Best Crime Books and Thrillers of 2017.

Michael Tanner is heading home from a business trip when he picks up the wrong laptop at airport security. The computer he takes home belongs to US senator Susan Robbins, and it contains top secret files that should never have been on there in the first place. With her career in politics on the line, Senator Robbins is determined to get her laptop back, whatever the cost...

Tanner is now a hunted man. But with the government against him, who can he trust to help him?

'Stunning ... I can't remember when I last read a book so gripping and so satisfying' PETER JAMES.
'Smart, swift and well-informed' SCOTT TUROW.
'Terrific' IAN RANKIN.
'A writer at the top of his game' MARK BILLINGHAM.
'Fantastic ... Kept me absolutely on the edge of my seat' MARTINA COLE.
'Timely, twisty and impossible to put down' KARIN SLAUGHTER.
'A masterclass in ratcheting up the tension ... A classy, sophisticated thriller' J.P. DELANEY.

'Seemingly ripped from recent headlines, Finder's latest is one of his most fiendishly plotted and eerily relevant thrillers ... A master of what might be called the "man in over his head" thriller, Finder delivers a tense, uncannily relevant tale about government secrets falling into the wrong hands' Kirkus.
'Finder takes a random mixup that could happen to any of us and spins it into a nail-biting nightmare' Linwood Barclay.
'Fast-moving action, and a clever political background, some of it not entirely unfamiliar these days' The Times.
'An enjoyable cat-and-mouse chase, with dark shadows of Snowden and Wikileaks' The Times, Summer Reads 2017.
'An adrenaline-filled cat-and-mouse story that has some of the most amazing chase scenes I've ever read' K.J. Howe, Metro.
'The plotting is first class, the characterisation is sublime and the way Finder injects pace into a story about nothing more than an absent-minded mistake is a masterclass' Crime Squad.
'Hitchcock would have admired Joseph Finder's The Switch' Guardian.

Joseph Finder is the New York Times bestselling author of fourteen novels including Judgement, Suspicion and The Fixer. Finder's international bestseller Killer Instinct won the International Thriller Writer's Award for Best Novel. He studied Russian at Yale and Harvard, after which he was recruited by the CIA. He lives in Boston, Massachusetts www.josephfinder.com

GOR008748141
The Switch by Joseph Finder
Joseph Finder
Used - Very Good
Hardback
Head of Zeus
2017-06-13
384
1786693844
9781786693846
N/A
Book picture is for illustrative purposes only, actual binding, cover or edition may vary.
This is a used book - there is no escaping the fact it has been read by someone else and it will show signs of wear and previous use. Overall we expect it to be in very good condition, but if you are not entirely satisfied please get in touch with us.