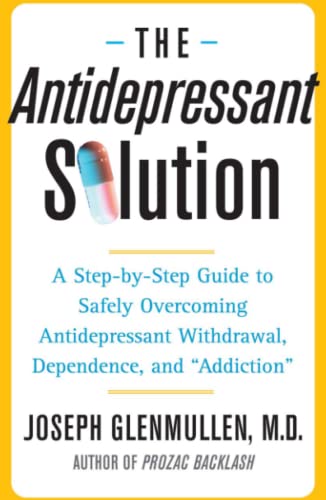 The Antidepressant Solution
by Joseph Glenmullen

Out of Stock
$29.49
inc. GST
Now available in paperback, THE ANTIDEPRESSANT SOLUTION has been widely praised as the only authoritative guide to help patients overcome anti-depress
Very Good
Only 0 left

The Antidepressant Solution by Joseph Glenmullen

The storm of controversy over the use - and misuse - of antidepressants continues unabated, with recent, more stringent government warnings that they may cause agitation, anxiety, hostility and even violent or suicidal tendencies. More than six million Britons take today's popular antidepressants. Harvard Medical School's distinguished Dr Joseph Glenmullen leads the charge in warning the public that antidepressants are over prescribed, under regulated and terribly misunderstood in their side and withdrawal effects. "The Antidepressant Solution" is the first book to call attention to the drugs' vicious circle: despite the fact that many people are ready to go off these drugs, they are needlessly still on them because either the patient or their doctor mistake antidepressant withdrawal for depressive relapse. Unfortunately, family doctors who are not familiar with how to safely wean patients off of them write seventy percent of prescriptions for these drugs. Now, however, "The Antidepressant Solution" offers a step-by-step guide for patients and doctors alike. Written by the premier authority in the field, "The Antidepressant Solution" is an invaluable book for all those concerned with going through the process - from friends and family members to the doctors and patients themselves.

John Horgan, author of the "End of Science" and "The Undiscovered Mind" An authoritative and eloquent antidote to the pro-drug bias of modern psychiatry.
Leon Eisenberg, M.D., Professor of Psychiatry, Harvard Medical School Dr. Glenmullen documents the carefully concealed dark side of these highly touted drugs and makes a strong case that alternative treatments yield equal benefits at much less risk. Provocative and hopeful, a must-read for anyone on the drugs.
Alan Stone, M.D., Professor of Psychiatry and Law, Harvard University, former President of the American Psychiatric Association Dr. Glenmullen has assembled from every possible source the clinical and scientific evidence that there are costs as well as benefits to Prozac and related drugs. He warns us that no one really knows the long-term consequences of these chemicals on the brain.
Joan Acocella, "The New Yorker" One is inclined to listen to him, because he is not a one-solution man. Indeed, he prescribes SSRI [antidepressants]. Like many cautious psychiatrists, he uses them to relieve depression to the point where the patient can do something about its source.
Sherwin B. Nuland, M.D., Yale School of Medicine, author of "How We Die" and "The Mysteries Within" The all-purpose pill that guarantees a psychiatric quick fix has finally been exposed as an illusion. Dr. Glenmullen's lucid explanations and engrossing narratives are the much-needed corrective to the sensationalism of the false prophets of Prozac and the zealots of Zoloft. This is the book that sets the record straight. It should become the criterion of reason, against which all the current hype and misinformation can be measured.
Thomas J. Moore, George Washington University Medical Center, author of "Prescription for Disaster: The Hidden Dangers in Your Medicine Cabinet" Joseph Glenmullen has done an outstanding job in portraying the real-life experiences of patients and using them to illustrate the scientific facts. If you really want to listen to Prozac, this is an eye-opening account that should not be missed.
Candace B. Pert, Ph.D., Research Professor, Georgetown University School of Medicine, author of "Molecules of Emotion: The Science Behind Mind-Body Medicine" Beautifully, clearly, and enthrallingly written, it is a courageous book and a must-read for every American.
Janet Maslin, "The New York Times" An important, deeply troubling examination of the means by which these drugs have become so widely disseminated and the possible long-term toll they may take.

Joseph Glenmullen,M.D., a clinical instructor in psychiatry at Harvard Medical School, is on the staff of Harvard University Health Services and is in private practice in Harvard Square. He is the author of SEXUAL MYSTERIES. A graduate of Brown University and Harvard Medical School, Dr. Glenmullen lives with his wife and three children in Cambridge, Massachusetts, and can be found on the web at: www.glenmullen.com

GOR005281178
The Antidepressant Solution by Joseph Glenmullen
Joseph Glenmullen
Used - Very Good
Paperback
Simon & Schuster Ltd
2006-06-19
272
074326973X
9780743269735
N/A
Book picture is for illustrative purposes only, actual binding, cover or edition may vary.
This is a used book - there is no escaping the fact it has been read by someone else and it will show signs of wear and previous use. Overall we expect it to be in very good condition, but if you are not entirely satisfied please get in touch with us.