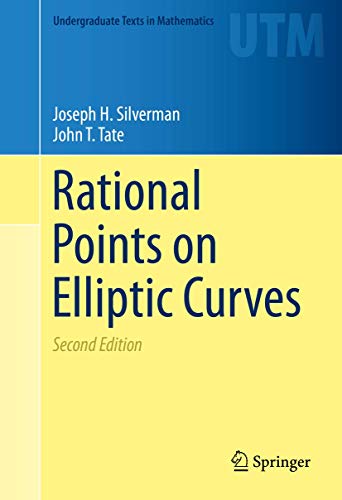 The theory of elliptic curves involves a pleasing blend of algebra, geometry, analysis, and number theory. This volume stresses this interplay as it develops the basic theory, thereby providing an opportunity for advanced undergraduates to appreciate the unity of modern mathematics. At the same time, every effort has been made to use only methods and results commonly included in the undergraduate curriculum. This accessibility, the informal writing style, and a wealth of exercises make Rational Points on Elliptic Curves an ideal introduction for students at all levels who are interested in learning about Diophantine equations and arithmetic geometry.

Most concretely, an elliptic curve is the set of zeroes of a cubic polynomial in two variables. If the polynomial has rational coefficients, then one can ask for a description of those zeroes whose coordinates are either integers or rational numbers. It is this number theoretic question that is the main subject of Rational Points on Elliptic Curves. Topics covered include the geometry and group structure of elliptic curves, the Nagell-Lutz theorem describing points of finite order, the Mordell-Weil theorem on the finite generation of the group of rational points, the Thue-Siegel theorem on the finiteness of the set of integer points, theorems on counting points with coordinates in finite fields, Lenstra's elliptic curve factorization algorithm, and a discussion of complex multiplication and the Galois representations associated to torsion points. Additional topics new to the second edition include an introduction to elliptic curve cryptography and a brief discussion of the stunning proof of Fermat's Last Theorem by Wiles et al. via the use of elliptic curves.

The two main changes for this edition are a new section on elliptic curve cryptography and an explanation of how elliptic curves played a role in the proof of Fermat's Last Theorem. ... the best place to start learning about elliptic curves. (Fernando Q. Gouvea, MAA Reviews, maa.org, April, 2016)

The book is an excellent introduction to elliptic curves over the rational numbers and ideal textbook for an undergraduate course. ... This book is highly recommended to students and researches interested in elliptic curves and their applications. It provides a natural step to a more advanced treatment of the subject. (Andrej Dujella, zbMATH 1346.11001, 2016)

Joseph H. Silverman is Professor of Mathematics at Brown University. He is the author of over 100 research articles and numerous books on elliptic curves, diophantine geometry, cryptography, and arithmetic dynamical systems.

John T. Tate is Professor Emeritus of Mathematics at The University of Texas at Austin and at Harvard University. For his seminal contributions to number theory, he was awarded the 2010 Abel Prize.

Introduction.- Geometry and Arithmetic.- Points of Finite Order.- The Group of Rational Points.- Cubic Curves over Finite Fields.- Integer Points on Cubic Curves.- Complex Multiplication.
NPB9783319185873
9783319185873
331918587X
Rational Points on Elliptic Curves by Joseph H. Silverman
Joseph H. Silverman
Undergraduate Texts in Mathematics
New
Hardback
Springer International Publishing AG
20150624
332
N/A
Book picture is for illustrative purposes only, actual binding, cover or edition may vary.
This is a new book - be the first to read this copy. With untouched pages and a perfect binding, your brand new copy is ready to be opened for the first time
Trustpilot