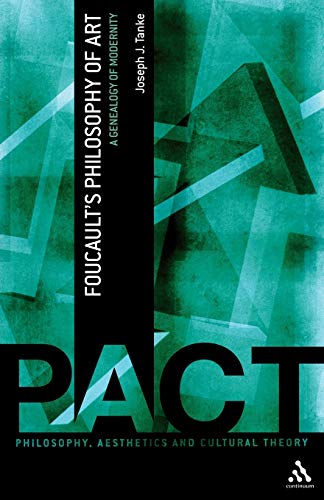 In Stock
50,99 $
inc. GST
Part of "The Philosophy, Aesthetics and Cultural Theory" series, this book offers an examination of Foucault's reflections on visual art. It traces his thought as it engages with the work of visual artists from the seventeenth century to the contemporary period.
Well Read
Only 1 left

Foucault's Philosophy of Art: A Genealogy of Modernity by Joseph J. Tanke

Foucault's Philosophy of Art: A Genealogy of Modernity tells the story of how art shed the tasks with which it had traditionally been charged in order to become modern. Joseph J. Tanke offers the first complete examination of Michel Foucaults reflections on visual art, tracing his thought as it engages with the work of visual artists from the seventeenth century to the contemporary period. The book offers a concise and accessible introduction to Foucaults frequently anthologized, but rarely understood, analyses of Diego Velzquezs Las Meninas and Ren Magrittes Ceci nest pas une pipe. On the basis of unpublished lecture courses and several un-translated analyses of visual art, Tanke reveals the uniquely genealogical character of Foucaults writings on visual culture, allowing for new readings of his major texts in the context of contemporary Continental philosophy, aesthetic and cultural theory. Ultimately Tanke demonstrates how Foucault provides philosophy and contemporary criticism with the means for determining a conception of modern art.

Tanke provides a strikingly clear and well-informed analysis of Foucault's genealogy of modernity. This book offers perspicuous readings of many of Foucault's major texts from the standpoint of visual art and its history. From diverse sources Tanke constructs a powerful theoretical model that should be valuable for those with interests in art history, visual culture, and recent European philosophy. Gary Shapiro, author of Archaeologies of Vision: Foucault and Nietzsche on Seeing and Saying (University of Chicago Press, 2003)
Ideal for both undergraduates seeking a reliable overview and for scholars interested in the positioning of artworks in modernity, this book's strengths are its clarity of composition, its author's critical detachment, and the fascinating use to which he puts Foucault's quite recently published lectures about artworks and artists.--Sanford Lakoff

Joseph J. Tanke is Chalsty Professor of Aesthetics and Philosophy at California College of Arts, USA.

GOR010276983
Foucault's Philosophy of Art: A Genealogy of Modernity by Joseph J. Tanke
Joseph J. Tanke
Philosophy, Aesthetics and Cultural Theory
Used - Well Read
Paperback
Bloomsbury Publishing PLC
2009-06-30
240
184706485X
9781847064851
N/A
Book picture is for illustrative purposes only, actual binding, cover or edition may vary.
This is a used book. We do our best to provide good quality books for you to read, but there is no escaping the fact that it has been owned and read by someone else previously. Therefore it will show signs of wear and may be an ex library book.