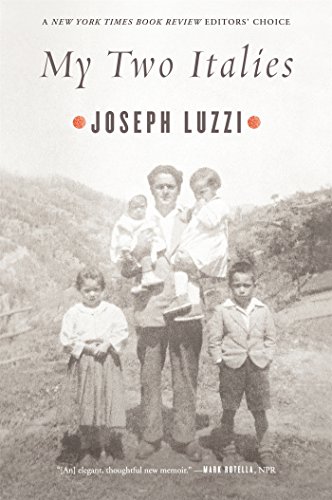 My Two Italies
by Joseph Luzzi

Out of Stock
$24.49
inc. GST
The child of Italian immigrants and an award-winning scholar of Italian literature, Joseph Luzzi straddles these two perspectives in My Two Italies to link his family's dramatic story to Italy's north-south divide, its quest for a unifying language, and its passion for art, food, and family.
Good
Only 0 left

My Two Italies by Joseph Luzzi

The child of Italian immigrants and an award-winning scholar of Italian literature, Joseph Luzzi straddles these two perspectives in My Two Italies to link his family's dramatic story to Italy's north-south divide, its quest for a unifying language, and its passion for art, food, and family. From his Calabrian father's time as a military internee in Nazi Germany - where he had a love affair with a local Bavarian woman - to his adventures amid the Renaissance splendour of Florence, Luzzi creates a deeply personal portrait of Italy that leaps past facile cliches about Mafia madness and Tuscan sun therapy. He delves instead into why Italian Americans have such a complicated relationship with the "old country," and how Italy produces some of the world's most astonishing art while suffering from corruption, political fragmentation, and an enfeebled civil society. With topics ranging from the pervasive force of Dante's poetry to the meteoric rise of Silvio Berlusconi, Luzzi presents the Italians in all their glory and squalor, relating the problems that plague Italy today to the country's ancient roots. He shares how his "two Italies" - the earthy southern Italian world of his immigrant childhood and the refined northern Italian realm of his professional life - join and clash in unexpected ways that continue to enchant the many millions who are either connected to Italy by ancestry or bound to it by love.

"My Two Italies [is] a brilliant tour de force that is part memoir, part cultural criticism and part paean to the magical city of Florence. A narrative at once elegant and elegiac, the book encapsulates the essence of contemporary Italy--sordid politics, organized crime, the bella figura--in a fast-paced prose that rushes by much too quickly." --Arlice Davenport, Wichita Eagle

"In his elegant, thoughtful new memoir, My Two Italies, [Joseph Luzzi] writes of watching his father and uncle carve up an entire goat, make wine, and hold a meeting of brothers to determine the fate of an uncle's unfaithful wife. And this was not 19th-century Calabria, but Rhode Island in the 1970s . . . In this relatively slim book, Luzzi effectively covers lots of ground on Italian identity as a whole: the concept of mammoni (40-year-old Italian men who live with their mothers), Italy's Slow Food movement, and a somewhat dutiful examination of the country's politics since World War II. On Americans of Italian descent, he writes 'we Italian Americans suffer from a form of cultural schizophrenia, half of our soul nourished by centuries of European arts and letters, ' while the other half is 'contaminated' by The Godfather and The Sopranos. But Luzzi can be heartbreakingly tender, as when he recalls his pregnant wife, who was hit by a car and died just after his daughter was delivered. It's only a few passages, but it is amazingly affecting. His daughter is now four years old; at bedtime he reads to her and tells her stories, for 'stories will be all that binds her to Calabria.' And when he travels to Florence now, without his wife, Luzzi considers yet another two Italies: 'the Italy of the living and the dead.' As for his own sense of being an Italian American, he strikes a bittersweet chord: 'We commemorate our past only to remind ourselves how far we have traveled from it.'" --Mark Rotella, NPR

"Written as part memoir, part disquisition on Italy, its dialect and grammar, its food and idiosyncracies, its celebrated writers and painters, its Mafia and founding myths, My Two Italies is also a thoughtful book about exile, the sense of displacement and confusion that those driven from their roots carry with them forever. Even if, as in Luzzi's own case, it is exile from a world that he himself never actually knew. Some things, he notes, are indeed translated into the idiom of a new life; others, 'felt in the blood, ' endure unchanged." --Caroline Moorehead, The Times Literary Supplement

"Joseph Luzzi['s] . . . charming new book, My Two Italies . . . succeed[s] in capturing the spirit of a certain form of biculturalism and the ambivalence and conflict it causes . . . Luzzi is particularly good when he shares personal experiences and conveys observations and ideas about identity. His anecdotes about family will strike a chord with any reader familiar, even vaguely, with the immigrant experience. The best of the book comes in the middle, in the chapter called 'The Fig Tree and the Impala, ' a lovely, well-composed rumination on the cultural and generational divide between Luzzi and his father that doubles as a thoughtful essay on the nature of language . . . Luzzi, a sympathetic storyteller with an easy, sometimes elegant style, succeeds admirably." --Adam Parker, The Post and Courier

"My Two Italies deals with the enduring disconnect between the ideal Italy that is admired as a center of civilization, and the hardship and hardness of the emigrant experience. Both come vividly alive in Luzzi's heartfelt and illuminating book." --Gay Talese, author of Unto the Sons

"Joseph Luzzi has written a funny and often moving family history that opens onto wider vistas that he knows and loves equally well--the Italian cultural and political landscape from Dante to Silvio Berlusconi. Full of charm and insight, but admirably frank and unsentimental, My Two Italies should be required reading on all flights to Italy." --Ross King, author of Leonardo and the Last Supper

"This is a delightful, poignant, moving, entertaining but above all illuminating book, which like the best art has many layers--of the Italian-American experience, of Italy's north-south divide, of Italy's strange but fascinating modern history and of the personal journey of its author. I commend it warmly." --Bill Emmott, author of Good Italy, Bad Italy and former editor of The Economist

"Joseph Luzzi has skillfully woven together a powerful and moving memoir of his Calabrese family and an entertaining, incisive study of an Italy split between north and south, St. Francis and Berlusconi, Botticelli and the Sopranos. My Two Italies is sad, funny, and deep--a timely book, packed with searching questions." --Marina Warner, winner of the 2012 National Book Critics Circle Award for criticism and author of The Lost Father

"Anecdotes . . . give Luzzi's work richness. And Luzzi's academic prowess in all cultural things Italian, adds spice. He draws from numerous authors, both long-gone and still alive, to delve into Italy's history and explain how the country's dialect-driven languages eventually were woven into one." --Lee Coppola, Buffalo News

"Luzzi's evocative personal history and incisive cultural critique illuminates the complex forces that have shaped his own identity. Being Italian and American, he comes to realize, has been both a bountiful gift and 'an ethnic cross I had to bear.'" --Kirkus

"The American-born son of poor but tough Calabrian immigrants, Luzzi 'yearned for the Italy of Dante and Michelangelo, not the one of sharp cheese and salted anchovies.' But while building a distinguished scholarly career writing about Italian high culture, the very different Italy of his parents continued to haunt him with the smells of its cooking, the calloused hands of his uncles, and the unsentimental way in which his mother dispatched animals for the family table . . . The contrasting ideals provide Luzzi with a lens through which to examine Italy and the Italian American experience, especially that of his family . . . When Luzzi shares his deepest pain--the sudden death of his pregnant wife in a car accident--his investigations of his extended family turn powerfully poignant, for it was they who cared for his infant daughter while he curled in a fetal position in his childhood bed. The result is a memoir that balances thoughtful observation with feelings that, one sense, still remain quite raw." --Brendan Driscoll, Booklist

"Midway along the journey through his life, Dante scholar Luzzi wakes to find himself in a dark wood of longing and desire, wishing to know more about his Calabrian heritage. Luzzi, a wonderful storyteller, plays Virgil to our pilgrim, guiding us through the schizophrenic character of Italian culture. To arrive at a deeper understanding of his Italian heritage, Luzzi enrolls in a doctoral program in Italian literature and language, studying Dante and Northern Italy rather than his family ancestral homeland of Calabria in the south. Luzzi energetically, and with some nostalgia, recounts stories of his various travels through Naples and Florence, his encounters with the works of Italian writers, and his meetings with members of his family. He learns that 'the Italian family is like Italy itself: fragmented on the surface, riven by intrigue, resistant to change, suspicious of outsiders, and quick to set individual interests over group ones.' In the end, Luzzi embraces his two Italys--Calabria and Tuscany--not as a burden or as a struggle, but as a gift that has brought him 'inside the disappearing world of my parents and millions of other Italian exiles." --Publishers Weekly

Joseph Luzzi is the author of Romantic Europe and the Ghost of Italy, which won the Scaglione Prize for Italian Studies from the Modern Language Association. His writing has appeared in The New York Times, the Los Angeles Times, Bookforum, and The Times Literary Supplement. He has received an essay award from the Dante Society of America, a teaching prize from Yale College, and a fellowship from the National Endowment for the Humanities. The first American-born child in his Italian family, he earned his doctorate from Yale University and is a professor at Bard College.