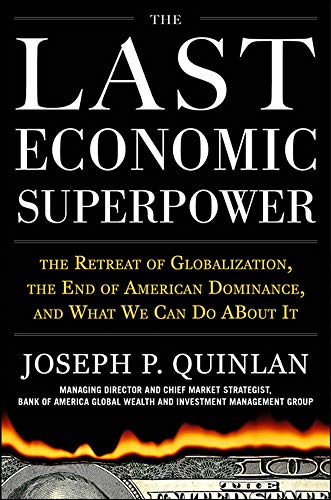 The Last Economic Superpower: The Retreat of Globalization, the End of American Dominance, and What We Can Do About It
by Joseph Quinlan

In Stock
$19.99
inc. GST
A provocative new look at America's role in the post-financial meltdown global economy--and how decisions made now will determine its success in the future
Very Good
Only 1 left

The Last Economic Superpower: The Retreat of Globalization, the End of American Dominance, and What We Can Do About It Summary

The Last Economic Superpower: The Retreat of Globalization, the End of American Dominance, and What We Can Do About It by Joseph Quinlan

The Risks and Rewards for the Westin the Coming Multipolar World

"A marked shift has occurred in the tone and assumptions surrounding our national fortune. Nowhere is this better seen than in the second generation of books dealing with America's financial crisis, particularly Joseph P. Quinlan's The Last Economic Superpower."
New York Journal of Books

The global economy, designed by Westernpowers with the United States as lead architect,is in the process of reconfiguration. The2008 global financial crisis has terminatedAmerica's reign as sole economic superpowerand opened up important new spheres of influenceto developing nations.

Does this signal the retreat of globalizationas we know it? Has an economic "coldwar" already begun? Will the West ever exertthe kind of control and influence it enjoyedjust a few short years ago?

In The Last Economic Superpower, JosephP. Quinlan, a Wall Street veteran and experton global economic affairs, addresses thesequestions and many others. Presenting hisvision with refreshing clarity and objectivity,Quinlan examines:

Decisions made now will shape the courseof history. The Last Economic Superpoweroutlines critical choices that must be made inorder to recast, reinvent, and reenergize a newstyle of globalization.

The Last Economic Superpower lays barethe issues and challenges that will decidewhether the world builds a new, functionalsystem that serves all or fragments into separatespheres of influence, which benefits noone.

Joseph P. Quinlan is Managing Director and the Chief Market Strategist of Bank of America, Global Wealth and Investment Management, in New York. He also serves as Senior Fellow at the Center for Transatlantic Relations, the Paul H. Nitze School of Advanced International Studies (SAIS) of Johns Hopkins University. Quinlan lectures on global finance at New York University, where he has been on the faculty since 1992; he also teaches at Fordham University.

GOR009978926
The Last Economic Superpower: The Retreat of Globalization, the End of American Dominance, and What We Can Do About It by Joseph Quinlan
Joseph Quinlan
Used - Very Good
Hardback
McGraw-Hill Education - Europe
2010-11-01
304
0071742832
9780071742832
Commended for Axiom Business Book Awards (International Business) 2011
Book picture is for illustrative purposes only, actual binding, cover or edition may vary.
This is a used book - there is no escaping the fact it has been read by someone else and it will show signs of wear and previous use. Overall we expect it to be in very good condition, but if you are not entirely satisfied please get in touch with us.