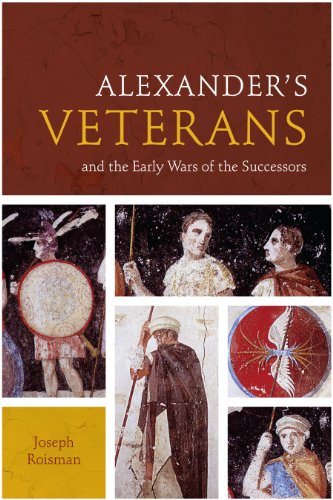 In Stock
$16.99
+10% GST
From antiquity until now, most writers who have chronicled the events following the death of Alexander the Great have viewed this history through the careers, ambitions, and perspectives of Alexander's successors. This book offers an investigation of the Macedonian veterans' experience during a crucial turning point in Greek history (323-316 BCE).
Very Good
Only 1 left

Alexander's Veterans and the Early Wars of the Successors Summary

From antiquity until now, most writers who have chronicled the events following the death of Alexander the Great have viewed this history through the careers, ambitions, and perspectives of Alexander's elite successors. Few historians have probed the experiences and attitudes of the ordinary soldiers who followed Alexander on his campaigns and who were divided among his successors as they fought for control of his empire after his death. Yet the veterans played an important role in helping to shape the character and contours of the Hellenistic world.

This pathfinding book offers the first in-depth investigation of the Macedonian veterans' experience during a crucial turning point in Greek history (323-316 BCE). Joseph Roisman discusses the military, social, and political circumstances that shaped the history of Alexander's veterans, giving special attention to issues such as the soldiers' conduct on and off the battlefield, the army assemblies, the volatile relationship between the troops and their generals, and other related themes, all from the perspective of the rank-and-file. Roisman also reexamines the biases of the ancient sources and how they affected ancient and modern depictions of Alexander's veterans, as well as Alexander's conflicts with his army, the veterans' motives and goals, and their political contributions to Hellenistic history. He pays special attention to the Silver Shields, a group of Macedonian veterans famous for their invincibility and martial prowess, and assesses whether or not they deserved their formidable reputation.

Joseph Roisman is Professor of Classics at Colby College. He has authored and edited numerous books and articles on Greek history, historiography, and oratory, including Brill's Companion to Alexander the Great, The Rhetoric of Manhood: Masculinity in the Attic Orators, The Rhetoric of Conspiracy in Ancient Athens, A Companion to Ancient Macedonia (with Ian Worthington), and Greek History from Homer to Alexander.

GOR009716582
Alexander's Veterans and the Early Wars of the Successors by Joseph Roisman
Joseph Roisman
Fordyce W. Mitchel Memorial Lecture Series
Used - Very Good
Paperback
University of Texas Press
2013-04-01
280
0292754310
9780292754317
Runner-up for PROSE Award, Classics and Ancient History 2013 (United States)
Book picture is for illustrative purposes only, actual binding, cover or edition may vary.
This is a used book - there is no escaping the fact it has been read by someone else and it will show signs of wear and previous use. Overall we expect it to be in very good condition, but if you are not entirely satisfied please get in touch with us.