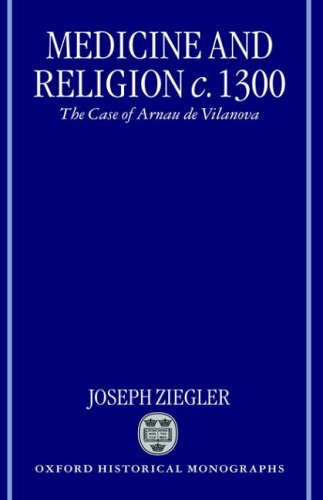 In Stock
$105.99
+10% GST
This book discusses the relationship between religion and medicine around 1300. Ziegler analyses the spiritual writings of two physicians in the light of their medical background. He examines the use of medical knowledge for non-medical purposes, and by clerics who did not engage in medical practice.
Very Good
Only 1 left

This book takes a fresh look at the cultural role of medicine among learned people around 1300. It was at this time that learned medicine came to be fully incorporated into the academic system and began to win greater social acceptance. Joseph Ziegler argues that physicians and clerics did not confine the role of medicine to its physical therapeutic function, and that fusion rather than disjunction characterized the relationship between medicine and religion at that time. Much of this argument relies on language analysis and on a close study of unedited manuscript sources. By juxtaposing the spiritual writings and the medical output of two learned physicians - Arnau de Vilanova (c. 1238-1311) and Galvano da Levanto (fl. 1300) - Dr Ziegler shows that they saw a medical purpose, namely to ensure the spiritual health of their audience and to reveal the mysteries of God and creation. When entering the spiritual realm, both brought to it a medical framework and extended their medical knowledge and curative activities from body to soul. By examining preachers' manuals and sermons, the author suggests that a growing tendency emerged among clerics in general and preachers in particular to appropriate current medical knowledge for spiritual purposes and to substantiate their extensive use of medical metaphors, analogies and exempla by citing specific medical authorities.

delicate linguistic analysis, at a level of skill and interest attainable only after saturation in manuscripts and Renaissance editions ... fastidiously avoids snap conclusions about the cultural role of medicine. * Peregrine Horden, EHR Sept. 00. Vol.115, No.463. *
a scholarly contribution to medical and religious history of the first order, elegantly presented by its publishers. * Peregrine Horden, EHR Sept. 00. Vol.115, No.463. *

Introduction ; The Language of the Physicians who Produce Spiritual Texts ; Medicine as a Vehicle for Religious Speculation ; Medicine for the Preachers ; Medicine and Religion: Between Competition and Cooperation ; Conclusions ; Appendices ; Bibliography ; Index