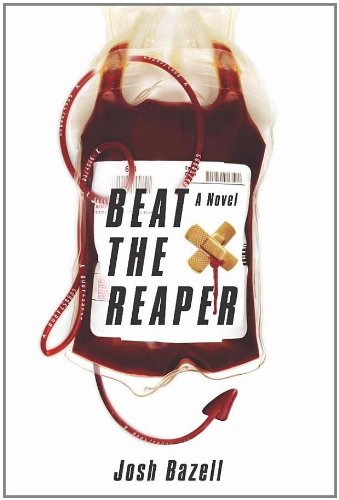 Beat The Reaper
by Josh Bazell

In Stock
$20.49
inc. GST
Peter Brown is a young Manhattan hospital intern with an unusual past that is just about to catch up with him. His morning begins with the quick disarming of a would-be mugger, topped off by a visit with a new patient - and from there Peter's day is going to get a whole lot worse and a whole lot weirder.
Very Good
6 in stock

Beat The Reaper by Josh Bazell

He's a doctor with a past...He's a hit man with a conscience...And he's got 24 hours to beat the reaper. Meet Peter Brown, a young Manhattan hospital intern with an unusual past that is just about to catch up with him. His morning begins with the quick disarming of a would-be mugger, followed by the steamy elevator encounter with a young female pharmaceutical rep, topped off by a visit with a new patient - and from there Peter's day is going to get a whole lot worse and a whole lot weirder. Because that patient knows Peter from his other life, when he had a different name and a very different job. The only reason he's a doctor now is thanks to the Witness Protection Program - and even that can't protect him from the long reach of the New Jersey Mob. Now he's got to buy some time to do whatever it takes to keep his patient - and himself - alive. "Beat the Reaper" is an intensely clever, imaginative novel that thrills on every page and is one of the most audacious and outrageous debuts of the year.

"Savagely diverting....BEAT THE REAPER only gets better, turn by turn, page by page." -- New York Daily News
"It's too much fun and too much gore to take your eyes off the page." -- Washington Post Book World
"A breakneck cross between a hospital drama, "The Godfather, "and a Quentin Tarantino film." -- Bloombert News
"A fast, funny ride....Bazell keeps the story moving at warp speed." -- Charlotte Observer
"Completely outrageous...genuinely entertaining." -- New York Times Book Review
"It's just what the doctor ordered....Think "House" meets "The Sopranos"." -- Entertainment Weekly "Benjamin Svetkey"
"Outrageously funny....BEAT THE REAPER may be the most imaginative debut of the year." -- USA Today "Carol Memmott"

Josh Bazell is a doctor and novelist. He has a BA in writing from Brown University, where he was awarded the Clarkson-Collins Prize in American Marine History, and an MD from Columbia. He has worked as a screenwriter, and while in medical school investigated suspicious deaths for the Chief Medical Examiner of the City of New York. He is currently a resident at the University of California, San Francisco, and is writing his second novel.

GOR001219641
Beat The Reaper by Josh Bazell
Josh Bazell
Used - Very Good
Paperback
Cornerstone
2009-02-05
320
0434019232
9780434019236
N/A
Book picture is for illustrative purposes only, actual binding, cover or edition may vary.
This is a used book - there is no escaping the fact it has been read by someone else and it will show signs of wear and previous use. Overall we expect it to be in very good condition, but if you are not entirely satisfied please get in touch with us.