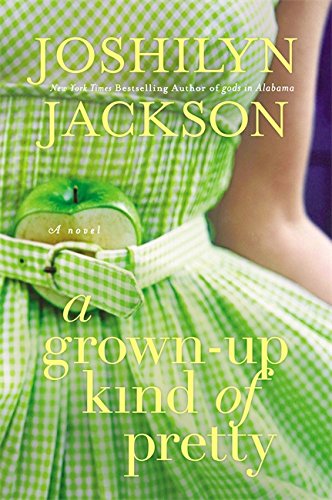 A Grown-Up Kind Of Pretty
by Joshilyn Jackson

Used Price
$36.99
inc. GST
Free Shipping in Australia
"A novel that follows a young woman's search for the truth about who her mother really is"--Provided by publisher.
Reviews:
Trustpilot
Very Good Good

A Grown-Up Kind Of Pretty Summary

A Grown-Up Kind Of Pretty by Joshilyn Jackson

Every fifteen years, trouble comes after the Slocumb women. Now, as their youngest turns fifteen, a whole new kind of commotion is chasing all three generations. Mosey's desperate to know who used their yard as a make-shift cemetery, and why. The oldest, forty-five year old Ginny, fights to protect Mosey from the truth, a fight that could cost Ginny the love of her life. Between them is Liza, silenced by a stroke, with the answers trapped inside her. To survive Liza's secrets and Mosey's insistent adventures, Ginny must learn to trust the love that braids the strands of their past--and stop at nothing to defend their future.

A Grown-Up Kind Of Pretty Reviews

"A deeply felt, engaging story."--The Atlantic
"A deeply felt, engaging story."-- The Atlantic
"Gripping."--Chris Waddington, "The Times Picayune"
"Highly immersive... a compelling page turner."-- PW
"Engrossing... A mystery, comedy and drama wrapped up in one." "Katie Lewis, Bookpage""
"A mesmerizing tale of a family coping with the revelation of a secret that will change their lives. . . Jackson's most absorbing book yet, a lush, rich read with three very different but equally compelling characters at its core." "Kristine Huntley, " Booklist "(Starred Review)""
"Liza, as the unreliable narrator, is used to perfection in this warm family story that teeters between emotional highs and lows, laughter and tears. Book groups will eat this up." "Library Journal""
"A Southern charmer, laced with humor, mystery and affairs of the heart.... A valentine to the bonds of family!" "Family Circle""
"Snappy dialogue with a Southern twang, spiritual uplift and undeniably likable characters." "Kirkus Reviews""
"[There are] hundreds of moving parts in the machinery of Jackson's intricate mystery, all deliciously unraveled one tantalizing clue at a time." "Gina Webb, The Atlanta Journal-Constitution""
"A deeply felt, engaging story." "The Atlantic""
"Three generations of Slocumbs grapple with deep-buried family secrets in this entertaining Southern whodunit." "All You Magazine""
"Gripping." "Chris Waddington, "The Times Picayune"""
"A quirky mystery that serves up a delicious blend of likeable characters, plot twists and life as seen through the eyes of three remarkable women in a Southern family, namely Mosey, Ginny, and Liza. The dialogue is authentic and the writing insightful and unexpectedly witty." "Larry Cox, "Tucson Citizen"""
"A Grown-Up Kind of Pretty proves again that Joshilyn Jackson is one the best writers of the new generation. This spellbinding novel unfolds through the voices of three women in one family: a grandmother, a mother, a young daughter. Jackson renders each of these women with vivid tenderness, ferocity, and great humor, so that the family itself becomes the fourth vital character in the story. You will find yourself rooting for them all, to the very last page." "Mark Childress, author of "Georgia Bottoms "and "Crazy in Alabama"""
"An unforgettable story of generational dysfunction and sloppily buried secrets." "Theresa Weaver, Atlanta" Magazine""
"Reading A Grown-Up Kind of Pretty feels a lot like falling in love: giddy and enthralling and a little bit dangerous. It's a heart-thumping mystery, an edge-of-your-seat drama, and a fiercely sweet comedy all at once, with a fistful of crazy-brave characters who reach from up the wild pages and grip your heart. I loved this book about what it means to be a family for its big heart, its pitch-perfect dialogue and the clever plot twists I've come to expect from Jackson. Book clubs take note: Here's your next pick!" "Sara Gruen, NYT bestselling author of Water for Elephants and Ape House""
"Jackson's signature style-the feisty, bighearted voice of "Gods in Alabama" and "Backseat Saints"-propels this funny, dark whodunit, where strong women who've made bad choices band together to come out on top." "Melissa Ruggieri, "The" "Atlanta Journal-Constitution"""
"Madness! Mayhem! Laughter! Tears! Emotional rollercoasters, old lies and an unmarked grave propel the Slocumb women into action. Joshilyn Jackson's signature style explodes in" "A GROWN-UP KIND OF PRETTY." "Buckle up and enjoy!" "Adriana Trigiani, bestselling author of Very Valentine""
"Highly immersive... a compelling page turner." "PW""

Joshilyn Jackson, a native of the Deep South, has worked as an actor and an award-winning teacher, and is now a writer and a mother of two. She is the author of gods in Alabama; Between, Georgia; The Girl Who Stopped Swimming; and Backseat Saints. Jackson lives with her husband and children outside of Atlanta

GOR007859702
A Grown-Up Kind Of Pretty by Joshilyn Jackson
Joshilyn Jackson
Used - Very Good
Hardback
Little, Brown & Company
2012-02-28
320
0446582352
9780446582353
N/A
Book picture is for illustrative purposes only, actual binding, cover or edition may vary.
This is a used book - there is no escaping the fact it has been read by someone else and it will show signs of wear and previous use. Overall we expect it to be in very good condition, but if you are not entirely satisfied please get in touch with us.