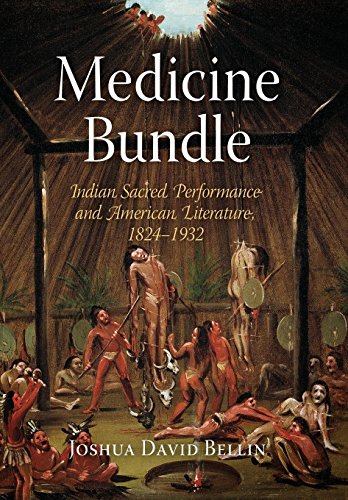 Joshua David Bellin examines the complex issues surrounding Indian sacred performance in its manifold and intimate relationships with texts and images by both Indians and whites.

From the 1820s to the 1930s, Christian missionaries and federal agents launched a continent-wide assault against Indian sacred dance, song, ceremony, and healing ritual in an attempt to transform Indian peoples into American citizens. In spite of this century-long religious persecution, Native peoples continued to perform their sacred traditions and resist the foreign religions imposed on them, as well as to develop new practices that partook of both. At the same time, some whites began to explore Indian performance with interest, and even to promote Indian sacred traditions as a source of power for their own society. The varieties of Indian performance played a formative role in American culture and identity during a critical phase in the nation's development.

In Medicine Bundle, Joshua David Bellin examines the complex issues surrounding Indian sacred performance in its manifold and intimate relationships with texts and images by both Indians and whites. From the paintings of George Catlin, the traveling showman who exploited Indian ceremonies for the entertainment of white audiences, to the autobiography of Black Elk, the Lakota holy man whose long life included stints as a dancer in Buffalo Bill's Wild West show, a supplicant in the Ghost Dance movement, and a catechist in the Catholic Church, Bellin reframes American literature, culture, and identity as products of encounter with diverse performance traditions. Like the traditional medicine bundle of sacred objects bound together for ritual purposes, Indian performance and the performance of Indianness by whites and Indians alike are joined in a powerful intercultural knot.

"An excellent book about the way in which performance constitutes (rather than merely reflects) cultural differences between and among Native American and Anglo-American peoples."-Joseph Roach, Yale University

Joshua David Bellin is a member of the faculty of La Roche College and the author of The Demon of the Continent: Indians and the Shaping of American Literature, also available from the University of Pennsylvania Press.

Chapter 1. George Catlin, Te-ho-pe-nee Wash-ee
Chapter 2. Being and Becoming "Indian"
Chapter 3. The Acts of the Prophets

GOR010189676
Medicine Bundle: Indian Sacred Performance and American Literature, 1824-1932 by Joshua David Bellin
Joshua David Bellin
Used - Very Good
Hardback
University of Pennsylvania Press
2007-10-31
272
0812240340
9780812240344
N/A
Book picture is for illustrative purposes only, actual binding, cover or edition may vary.
This is a used book - there is no escaping the fact it has been read by someone else and it will show signs of wear and previous use. Overall we expect it to be in very good condition, but if you are not entirely satisfied please get in touch with us.