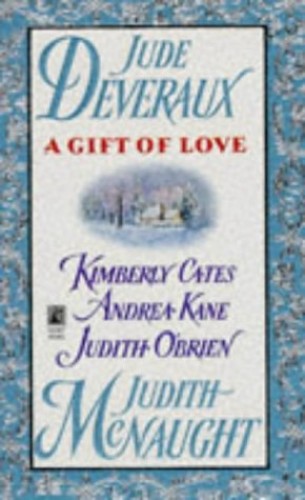 A Gift of Love
by Jude Deveraux

Out of Stock
$16.49
inc. GST
A collection of short romance stories. These are set in various locations including a village in Victorian England, where an embittered earl seeks a governess for a girl named Noelle; and a Manhattan apartment, where an unusual fairy godmother grants a secret wish.
Very Good
Only 0 left

A Gift of Love Summary

A Gift of Love by Jude Deveraux

A Gift Of Love captures holiday magic as it transports us...to New York City, where a schoolteacher slips an antique gold ring on her finger and travels back in time to a man who desperately needs her love...to a village in Victorian England, where an embittered earl seeks a governess for a lovely, defiant little girl named Noelle...to a starry London night, on which a Christmas pony heralds a gift greater than any king's ransom...to the snow-covered hills of Virginia, where a young widow learns during a holiday trip that miracles really do come in the least expected packages...and to a reclusive tycoon's Newport estate, where a determined young woman sets out to unlock the secrets of a man's heart.
Let A Gift Of Love open the door to worlds of passion and adventure, where love -- and miracles -- are always in the air!

Judith McNaught is the #1 New York Times bestselling author who first soared to stardom with her stunning bestseller Whitney, My Love, and went on to win the hearts of millions of readers with Once and Always, Something Wonderful, A Kingdom of Dreams, Almost Heaven, Paradise, Perfect, Until You, Remember When, Someone to Watch Over Me, the #1 New York Times bestseller Night Whispers, and many other novels. There are more than thirty million copies of her books in print. She lives in Texas.

Jude Deveraux is the author of more than forty New York Times bestsellers, including Moonlight in the Morning, The Scent of Jasmine, Scarlet Nights, Days of Gold, Lavender Morning, Return to Summerhouse, and Secrets. To date, there are more than sixty million copies of her books in print worldwide. To learn more, visit JudeDeveraux.com.

Andrea Kane is the New York Times and USA TODAY bestselling author of twenty-eight novels, including fourteen psychological thrillers and fourteen historical romantic suspense titles. Kane's first contemporary suspense thriller, Run for Your Life, became an instant New York Times bestseller. She followed with a string of bestselling psychological thrillers including No Way Out, Twisted, and Drawn in Blood. With a worldwide following of passionate readers, her books have been published in more than twenty languages. Kane lives in New Jersey with her husband and family. She's an avid crossword puzzle solver and a diehard Yankees fan. Otherwise, she's either writing or playing with her Pomeranian, Mischief, who does his best to keep her from writing.

Writing romance novels has got to be the way to make a living in the world. What other career allows you to send the kids off to school, walk the dog, and vanish into the most fascinating of historical times and places, with the most glorious of men, to escape danger and find everlasting love for the rest of the day?
Like most writers, I knew early on that I wanted to be a writer. Well, almost. Actually, writing was the third choice on my short list of career possibilities, right after Fairy Princess and Prima Ballerina. The first two didn't work out. So after college I moved to New York, where I worked for Seventeen Magazine. Not only had I never really been to New York before, but I believe I was the only editorial assistant in the magazine industry who still wore knee socks. Soon I was promoted to Editor of the "Letters to the Editor" department. Yes, there really IS an editor for the letters to the editor column. But it allowed me to write articles, answer the personal problems of teens (boys and zits were the big topics of concern), and rummage through the back files of the magazine. I found Sylvia Plath's original carbon of a short story she submitted while still in high school. There were articles on up-and-coming talents with names like Judy Holiday, Marlon Brando and Elvis. And very occasionally I was employed as a last-minute makeover subject. That was me looking miserable after getting the "Brideshead Revisited" bob.
Then I lucked into a fabulous job - as a jacket copy writer at a publishing house called Pocket Books. There I first read Jude Deveraux, Judith McNaught and Julie Garwood in manuscript form, and from those I would compose the blurbs for the book covers. It was heaven. I would read straight through my lunch hour, thus accounting for the chicken salad and iced tea on the returned manuscripts. But as much as I loved reading those marvelous stories, what I really wanted to do was to write one. Just one. Just to see what would happen.
Life interfered. I went back into magazines, this time at Self as an editor and writer. I got married, then had my son. I was still on maternity leave, writing general health articles while bouncing a newborn on my knee, that I began to dream once again of writing a romance novel. So that is exactly what I did. And I modestly claim to have written the most horrendous first three chapters of ANY book, in ANY genre, at ANY time in history. Unfortunately, still addled by the turmoil of being a new mom (hey, it's an excuse), I actually sent the wretched chapters to agents and publishers.
The rejections were polite form letters. Dozens of them. I shoved them into a bottom drawer and stuck to articles, becoming a free-lance writer and full-time mom. A few years later I gave romance writing another try. This time I sent it to only one person, Linda Marrow, with whom I had worked at Pocket Books years earlier. I certainly did not expect her to accept the manuscript. But I did hope she would let me know which editor at whatever house just might be interested in my time-travel romance.
Instead, I received a call from Linda three days later, offering me a two book contract.
Now I am a single mom. My son is twelve. I live in Brooklyn. And I'm lucky enough to write romance novels for a living. So please excuse me while I slip into something more comfortable. Such as Civil War Atlanta, or Tudor England, or Georgian Ireland, or....Did I mention how much I love this job?

Kimberly Cates is the beloved author of the over ten historical romances, including Crown of Mist, Restless Is the Wind, Briar Rose, and Lily Fair. She turned her talents to contemporary fiction with her novels Fly Away Home and The Mother's Day Garden. She is also the author of the short story "Gabriel's Angel" in the holiday collection A Gift of Love. A native of Illinois, Kimberly taught elementary school for three years and married her high school sweetheart.

GOR001700426
A Gift of Love by Jude Deveraux
Jude Deveraux
Used - Very Good
Paperback
Simon & Schuster
1996-11-26
480
0671536613
9780671536619
N/A
Book picture is for illustrative purposes only, actual binding, cover or edition may vary.
This is a used book - there is no escaping the fact it has been read by someone else and it will show signs of wear and previous use. Overall we expect it to be in very good condition, but if you are not entirely satisfied please get in touch with us.