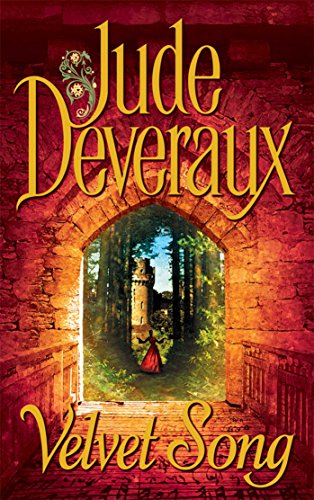 They were both outcasts by a harsh decree -- and on the brink of a shared destiny of passion!
With her father murdered, her home burned, lovely Alyx Blackelt fled to the woods -- and sanctuary in the camp of Raine Montgomery, a nobleman outlawed by the king's edict. There she hid her beauty in the guise of a boy, and her sorrow in her work as Montgomery's squire.
But how long could such loveliness as hers be hidden? How long could such a gallant man's desires be blind? And how soon -- even as a blood feud raged between the Montgomerys and the Chatworths, as angry swords clattered in the name of family honor -- one woman's love would make all the difference...one woman's love would inflame a hero's passion, touch a king's pity, and raise a song of praise in every English heart.

Jude Deveraux is the author of more than forty New York Times bestsellers, including Moonlight in the Morning, The Scent of Jasmine, Scarlet Nights, Days of Gold, Lavender Morning, Return to Summerhouse, and Secrets. To date, there are more than sixty million copies of her books in print worldwide. To learn more, visit JudeDeveraux.com.

GOR002683482
Velvet Song by Jude Deveraux
Jude Deveraux
Used - Very Good
Paperback
Simon & Schuster
2003-07-02
10
0671739751
9780671739751
N/A
Book picture is for illustrative purposes only, actual binding, cover or edition may vary.
This is a used book - there is no escaping the fact it has been read by someone else and it will show signs of wear and previous use. Overall we expect it to be in very good condition, but if you are not entirely satisfied please get in touch with us.