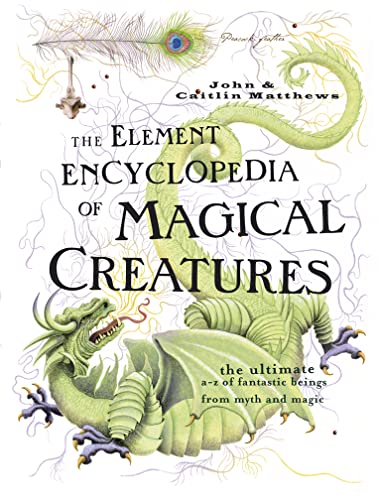 The Element Encyclopedia of Magical Creatures
by Judika Ilkes

Third in the hugely popular series of Element Encyclopedias, this is the most comprehensive guide you'll ever find to every magical creature from myth, folklore and legend around the world.

The Element Encyclopedia of Magical Creatures: The Ultimate A-Z of Fantastic Beings from Myth and Magic by Judika Ilkes

Third in the hugely popular series of Element Encyclopedias, this is the most comprehensive guide you'll ever find to every magical creature from myth, folklore and legend around the world.

This compendium of magical creatures explores the history, folklore and mythology of these facinating beasts throughout all magical worlds. Including stories, celebrations, traditions, and amazing facts about the creatures, this book spans every major culture across the globe.

Many of the creatures described in the book have appeared in the fictitious worlds of the brothers Grimm, Lewis Caroll, J.K. Rowling, Tolkien and countless other writers who have stirred our imaginations since childhood fairytales. From unicorns, giants, fairies, elves, goblins, dwarves and trolls to nymphs, mermaids, sphinxes, ogres, cyclops, dragons, mermaids, salamanders, basilisks, banshees, werewolves, griffins, centaurs, satyrs and gremlins - this is the ultimate reference book on creatures from the magical world.

But have you ever heard of Cherufes, Lampaluguas or the Quetzal?

The cross-cultural focus spans from the most ancient of creatures to those which have come to prominence relatively recently. Every obscure and mythological creature is described in detail in this fantastic book, including gods from many cultures and everyday animals that carry magical symbolism.

The information not only refers each creature to the mythology surrounding it, but also illustrates how many of these magical beasts relate to each other and are interconnected across mythical worlds.

Find out more in The Element Encyclopedia of Magical Creatures.

John and Caitlin Matthews are two of the most well-respected experts in the area of mythology and legend. Best known for their work surrounding Celtic and Arthurian traditions, they also have a tremendously broad base of knowledge of cultures worldwide from which they have drawn on for this amazing work. Their previous books include The Encyclopedia of Celtic Myth and Legend, Walkers Between the Worlds and The Aquarian Guide to British and Irish Mythology and Hallowquest: The Arthurian Tarot Course.

GOR002335437
The Element Encyclopedia of Magical Creatures: The Ultimate A-Z of Fantastic Beings from Myth and Magic by Judika Ilkes
Judika Ilkes
Used - Very Good
Hardback
HarperCollins Publishers
2005-12-05
704
0007208731
9780007208739
N/A
Book picture is for illustrative purposes only, actual binding, cover or edition may vary.
This is a used book - there is no escaping the fact it has been read by someone else and it will show signs of wear and previous use. Overall we expect it to be in very good condition, but if you are not entirely satisfied please get in touch with us.