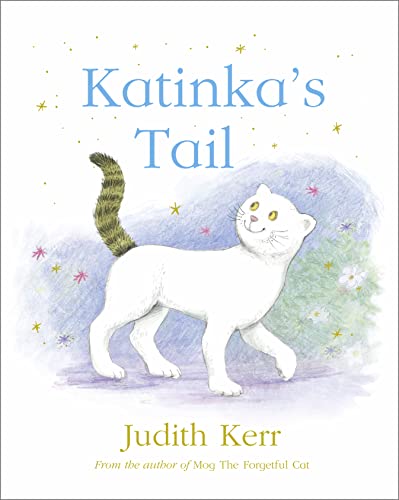 The brand new picture book from the beloved and iconic Judith Kerr.

The brand new picture book from the beloved and iconic Judith Kerr.

This magical new book from the one and only Judith Kerr is brimming with her trademark warm humour and exquisitely imaginative artwork. Come on a wondrous journey with Katinka, a perfectly ordinary pussycat, with a not-quite-so-ordinary tail...

A classic-in-the-making from Judith Kerr OBE, recipient of the Booktrust Lifetime Acveivement Award and creator of the iconic Tiger Who Came to Tea and Mog the Forgetful Cat, this delightful story is the perfect gift for boys and girls of all ages.

"Beautiful drawings, precise language: Katinka's tale has all the magic we have come to expect of Kerr." The Times, Children's Book of the Week

"...a beautiful, funny, warm and tender picture book, which takes a joyous and magical twist at the end. We're in the presence of a true master of her art here..." Booktrust

"Wonderful illustrations and the sprinkling of golden magic make this a book to treasure." Julia Eccleshare, LoveReading4Kids - Books of the Year 2017

"Kerr is one of the best authors a child of 3+ could encounter."
The Times

Praise for The Tiger Who Came to Tea:

Praise for Mog the Forgetful Cat:

GOR010020541
Katinka's Tail by Judith Kerr
Judith Kerr
Used - Like New
Hardback
HarperCollins Publishers
2017-10-19
32
0008255296
9780008255299
N/A
Book picture is for illustrative purposes only, actual binding, cover or edition may vary.
This is a used book - there is no escaping the fact it has been read by someone else and it will show signs of wear and previous use. Overall we expect it to be in very good condition, but if you are not entirely satisfied please get in touch with us.