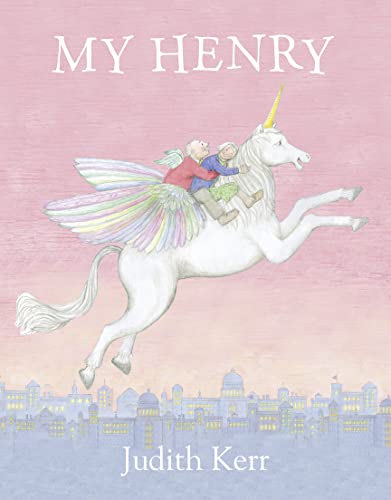 My Henry
by Judith Kerr

Through charming verse and glowing illustrations, Judith Kerr takes us on a magical and moving journey that proves love really does conquer everything. A truly special picture book destined to be loved and treasured by children and adults alike for years to come.

My Henry by Judith Kerr

Through charming verse and glowing illustrations, Judith Kerr takes us on a magical and moving journey that proves love really does conquer everything. A truly special picture book destined to be loved and treasured by children and adults alike for years to come.

"It's things we've never tried before
That are the greatest fun,
Like riding on a dinosaur,
Which I had never done."

Married couples are used to little trips together. Henry's wife can see no reason why they should stop just because one of them is no longer around. In fact she can't help going a little bit over the top, imagining all sorts of wonderful outings, including dinosaur rides and dolphin drawn water ski sessions. In the end however, even the most magical and exotic daydreams can never quite compare to their past everyday life together.

Fom the bestselling author of The Tiger Who Came To Tea.

"My Henry is as charming as her other works... For all the depth of underlying emotion, there's a celebratory feel to it, an unfeigned lightness of spirit that, throughout her life, has been a great boon." Cassandra Jardine, The Telegraph

"It bears all her trademarks, lively illustration, a cheerful blend of the everyday and the fantastic... A deeply poignant yet ultimately uplifting tale..." Giulia Rhode, Sunday Express

"In this moving picture book, [Judith Kerr] explores in charming verse the magical and wondrous adventures a widow imagines for herself and her recently deceased husband." The Lady

" A magical rhyming tale" The Times

Praise for 'Twinkles, Arthur and Puss':
"A very engaging take on feline behaviour" The Bookseller

Praise for 'The Tiger Who Came To Tea':
"Near perfection of form is embellished by clear, expressive illustrations. The pace is exactly right, the resolution totally satisfying." Dorothy Butler, Babies Need Books.

"A modern classic." The Independent.

"This book has enduring charm and young children will delight in the preposterous notion of a tiger creating mayhem in the house." Junior Magazine

Praise for 'Mog the Forgetful Cat':
"Grandparents are likely to get as much fun out of seeing it again as the new generation of fans just learning to read!" Choice Magazine

Praise for 'Goodbye Mog':
"Kerr's warmth, humour and honesty make this an engaging introduction to a difficult topic." Financial Times

"A supremely sensitive story." The Times

GOR005295668
My Henry by Judith Kerr
Judith Kerr
Used - Very Good
Paperback
HarperCollins Publishers
2012-02-02
32
0007388128
9780007388127
N/A
Book picture is for illustrative purposes only, actual binding, cover or edition may vary.
This is a used book - there is no escaping the fact it has been read by someone else and it will show signs of wear and previous use. Overall we expect it to be in very good condition, but if you are not entirely satisfied please get in touch with us.