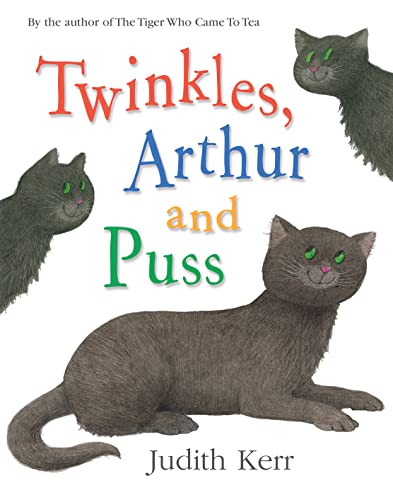 A furry feline tale from the creator of Mog the Forgetful Cat and The Tiger Who Came to Tea!

A furry feline tale from the creator of Mog the Forgetful Cat and The Tiger Who Came to Tea!

Grandpa has a black cat called Puss. They like eating bacon and chips together.

The Jones family also have a black cat. They call him Twinkles.

Lady Daisy found a lovely black cat outside her window one day, whom she calls Arthur.

`A very engaging take on feline behaviour' The Bookseller

Praise for `The Tiger Who Came To Tea':
`Near perfection of form is embellished by clear, expressive illustrations. The pace is exactly right, the resolution totally satisfying.' Dorothy Butler, Babies Need Books.

Praise for `Mog the Forgetful Cat':

`Kerr's warmth, humour and honesty make this an engaging introduction to a difficult topic.' Financial Times

GOR002324135
Twinkles, Arthur and Puss by Judith Kerr
Judith Kerr
Used - Very Good
Hardback
HarperCollins Publishers
2007-10-01
40
0007254466
9780007254460
N/A
Book picture is for illustrative purposes only, actual binding, cover or edition may vary.
This is a used book - there is no escaping the fact it has been read by someone else and it will show signs of wear and previous use. Overall we expect it to be in very good condition, but if you are not entirely satisfied please get in touch with us.