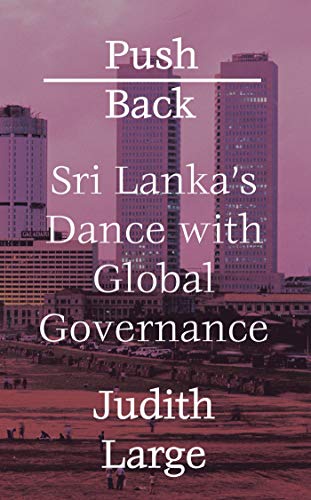 Push Back
by Judith Large

In 2009, after decades of conflict, the Sri Lankan government proclaimed the decisive defeat of the Liberation Tamil Tigers of Elam. Subsequently, the state proved resistant to attempts by the UN and other international bodies to promote post-war reconciliation or reform.

In this incisive new work, Judith Large investigates the ways in which the Rajapaksa government was able to subvert international diplomatic efforts, as well as exploring the wider context of rising Sinhalese nationalism, the attendant growth of discrimination against minorities, and efforts by both the diaspora and citizens within Sri Lanka to work towards a positive peace.

Push Back is vital reading not only for those interested in Sri Lanka, but also for those concerned about the wider implications of the conflict for human rights, peace-making, and geopolitics.

`The first serious academic study of the Rajapaksa regime's manipulation of the international system, which enabled them to preside over mass atrocities and get away scot free.'
Frances Harrison, former Sri Lanka correspondent for the BBC and author of Still Counting the Dead: Survivors of Sri Lanka's Hidden War

`Incisively interrogates Sri Lanka's socio-political fabric under the Rajapaksa regime ... the book sheds new light on how the government got away with outrageous human rights violations, even after the war.'
Sanjana Hattotuwa, Centre for Policy Alternatives (Sri Lanka)

`Offers a fascinating account of the Sri Lankan government's tense relationship with the international community. Filled with sharp insights, Push Back will help us all have a better sense of where Sri Lanka may be headed.'
Alan Keenan, Sri Lanka Project Director, International Crisis Group

`A brilliant exposition of the end game in the Sri-Lankan civil war.'
Kevin Clements, University of Otago

`This important new volume is essential reading for those wishing to understand the decades-long conflict in Sri Lanka, the quest for accountability, and the challenges of building peace in the wake of conflict.'
Chandra Lekha Sriram, University of East London

'An exceptionally detailed and carefully crafted study ... the book strikes an excellent balance between accessibility of style and empirical rigour ... a satisfying combination of facts and rigorous analysis that will be a vital source for anyone engaging in research, development or policy work in Sri Lanka now and in the future.'
Commonwealth and Comparative Politics

Judith Large is a senior research fellow at the Conflict Analysis Research Centre at the University of Kent. She has over twenty-five years experience in international conflict analysis, mediation and peace building, ranging from work with civic groups and national governments to UN agencies including the UNHCR, UNDP, BCPR, WHO, and others.

GOR009856724
Push Back: Sri Lanka's Dance with Global Governance by Judith Large
Judith Large
Used - Very Good
Paperback
Zed Books Ltd
2016-12-15
304
1783606541
9781783606542
N/A
Book picture is for illustrative purposes only, actual binding, cover or edition may vary.
This is a used book - there is no escaping the fact it has been read by someone else and it will show signs of wear and previous use. Overall we expect it to be in very good condition, but if you are not entirely satisfied please get in touch with us.