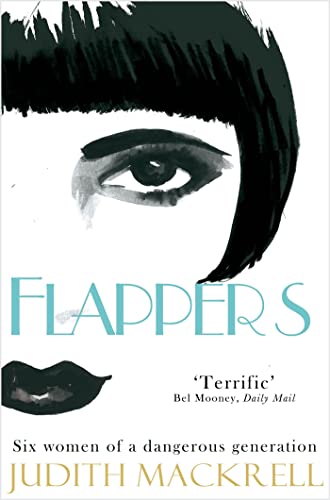 Out of Stock
$24.99
inc. GST
A gripping biography of six extraordinary women who, in their very different ways, epitomise the decade they came of age - the 1920s
Very Good
Only 0 left

Flappers: Six Women of a Dangerous Generation by Judith Mackrell

For many young women, the 1920s felt like a promise of liberty. It was a period when they dared to shorten their skirts and shingle their hair, to smoke, drink, take drugs and to claim sexual freedoms. In an era of soaring stock markets, consumer expansion, urbanization and fast travel, women were reimagining both the small detail and the large ambitions of their lives.

In Flappers, acclaimed biographer Judith Mackrell follows a group of six women - Diana Cooper, Nancy Cunard, Tallulah Bankhead, Zelda Fitzgerald, Josephine Baker and Tamara de Lempicka - who, between them, exemplified the range and daring of that generation's spirit. For them, the pursuit of experience was not just about dancing the Charleston and wearing fashionable clothes. They made themselves prominent among the artists, icons, and heroines of their age, pursuing experience in ways that their mothers could never have imagined, seeking to define what it was to be young and a woman in an age where the smashing of old certainties had thrown the world wide open.

Talented, reckless and wilful, with personalities that transcended their class and background, they re-wrote their destinies in remarkable, entertaining and sometimes tragic ways. And between them they blazed the trail of the New Woman around the world.

Flappers is all good, dirty fun . . . Mackrell is an engaging storyteller with a deceptively light touch -- Cressida Connolly * Sunday Telegraph *
Offers a way to look beyond the cliches of the Roaring Twenties into what was actually going on in these women's heads. Mackrell - who writes with great brio - shows us the uncertainly and confusion that often lay behind the brittle artifice. -- Bee Wilson * Sunday Times *
Scintillating ... Mackrell is clever at painting the subtly complex picture of these women's lives from giddy high spirits to steadfast obstinacy, from emotional fragility to creative focus and weaving them together against a backdrop that is also writ clear. This enthralling, elegant book conjures up all the glamour and razzmatazz but never flinches from the caverns of pain beneath. -- Caroline Jowett * Daily Express *
Judith Mackrell's group biography of six women of the Roaring Twenties is a terrific read. -- Bel Mooney * Daily Mail *
Engaging -- Amanda Foreman * Mail on Sunday *
Informative and deeply moving ... The strength of this compelling book derives from the cumulative effect of so much pain and suffering endured by these once hopeful young pioneering women -- Anne Sebba * Literary Review *
Erudite and detailed * Spectator *
Mackrell interweaves these intense lives with rich detail of their wider worlds . . . she writes beautifully, peppering her prose with their sly one-liners and her own insights, while maintaining a pace as swift as the exhausting lives she describes. -- Sunday Express * Kate Colquhoun *
Hugely entertaining . . . in bringing these fascinating women back to life, she reminds today's women that our own lives would be very different without the trails their generation blazed. * Irish Times *
It's in the bringing together of these highly diverse women under the 'flapper' umbrella that Mackrell's real genius lies, showing us the relationship between an age and the very different individuals who shone during it. -- Lesley McDowell * Independent on Sunday *

Judith Mackrell is a celebrated dance critic, writing first for the Independent and now for the Guardian. Her biography of the Russian ballerina Lydia Lopokova, Bloomsbury Ballerina, was shortlisted for the Costa Biography Award. She has also appeared on television and radio, as well as writing on dance, co-authoring The Oxford Dictionary of Dance. She lives in London with her family.

GOR005916888
Flappers: Six Women of a Dangerous Generation by Judith Mackrell
Judith Mackrell
Used - Very Good
Paperback
Pan Macmillan
2014-05-22
512
0330529528
9780330529525
N/A
Book picture is for illustrative purposes only, actual binding, cover or edition may vary.
This is a used book - there is no escaping the fact it has been read by someone else and it will show signs of wear and previous use. Overall we expect it to be in very good condition, but if you are not entirely satisfied please get in touch with us.