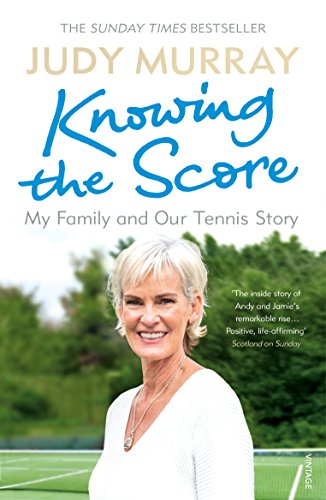 Knowing the Score
by Judy Murray

Knowing the Score: My Family and Our Tennis Story by Judy Murray

The Sunday Times bestseller Judy Murray provides the ultimate insight into life with her tennis champion sons Andy and Jamie. What happens when you find you have exceptional children? Do you panic? Put your head in the sand? Or risk everything and jump in head first? As mother to tennis champions Jamie and Andy Murray, Scottish National Coach, coach of the Fed Cup, and general all-round can-do woman of wonder, Judy Murray is the ultimate role model for believing in yourself and reaching out to ambition. As a parent, coach, leader, she is an inspiration who has revolutionised British tennis. From the soggy community courts of Dunblane to the white heat of Centre Court at Wimbledon, Judy Murray's extraordinary memoir charts the challenges she has faced, from desperate finances and growing pains to entrenched sexism. We all need a story of `yes we can' to make us believe great things are possible. This is that story. Longlisted for the William Hill Sports Book of the Year Award `Quite simply, she is inspirational, passionate and great fun' Observer

"This truly is the inside story of Andy and Jamie's remarkable rise. Compelling...This is a positive, life-affirming view." -- Alan Patullo * Scotland on Sunday *
"A cracking book" -- Chris Evans breakfast show, BBC Radio 2
"A fascinating and incriminating document. As well as mapping out the travails of tennis parenthood, it offers a window into generations of patronising, belittling attitudes to women in sport... She should be considered a national treasure" -- Simon Briggs * Daily Telegraph *
"Judy's account is honest and open... She is passionate about getting children into sport...Judy Murray has plenty to feel proud about." * Scotsman *
"Quite simply, she is inspirational, passionate and great fun" -- Kirsty Wark * Observer *
"A life both defined and enriched by tennis, which reveals a woman whose own achievements are no less impressive than those of her superstar sons" * Radio Times *

Judy Murray is a former Scottish international tennis player with 64 national titles to her name. She became Scottish National Coach in 1995, the same year that she became the first woman to pass the Lawn Tennis Association's Performance Coach Award. She initiated the Scottish Development School programme which ultimately produced four Davis Cup players and one Fed Cup player, including her Grand-Slam-winning sons, Jamie and Andy.

GOR009045141
Knowing the Score: My Family and Our Tennis Story by Judy Murray
Judy Murray
Used - Like New
Paperback
Unknown
0
1784706493
9781784706494
N/A
Book picture is for illustrative purposes only, actual binding, cover or edition may vary.
The book has been read, but looks new. The book cover has no visible wear, and the dust jacket is included if applicable. No missing or damaged pages, no tears, possible very minimal creasing, no underlining or highlighting of text, and no writing in the margins.