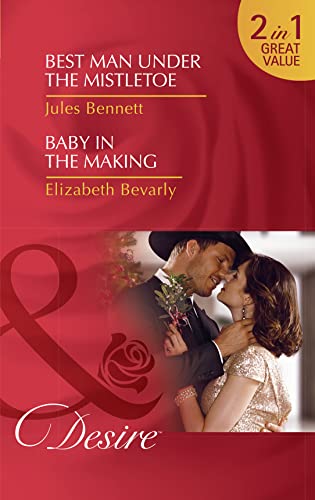 Best Man Under The Mistletoe
by Jules Bennett

BEST MAN UNDER THE MISTLETOE by Jules Bennett

Best Man Under The Mistletoe Summary

BEST MAN UNDER THE MISTLETOE by Jules Bennett

Planning a wedding with the gorgeous, sexy best man would have been a lot easier if he weren't Chelsea Hunt's second-worst enemy. Gabe Walsh is furious that he's being blamed for the sins of his uncle, but soon his desire to prove his innocence turns into the desire to make Chelsea his!

BABY IN THE MAKING by Elizabeth Bevarly

Hannah Robinson will lose her fortune if she doesn't get pregnant, fast. So her solution? Daredevil entrepreneur Yeager Novak...and the child they'll make together! Opposites attract on this baby-making adventure, but will that be enough to turn their pact into a real romance?

USA TODAY Bestselling Author Jules Bennett has penned more than 50 novels during her short career. She's married to her high school sweetheart, has two active girls, and is a former salon owner. Jules can be found on Twitter, Facebook (Fan Page), and her website julesbennett.com. She holds contests via these three outlets with each release and loves to hear from readers! Elizabeth Bevarly is the award-winning, nationally number one bestselling author of more than seventy novels and novellas. Her books have been translated into two dozen languages and published in three dozen countries. An honors graduate of the University of Louisville, she has called home places as diverse as San Juan, Puerto Rico and Haddonfield, New Jersey, but now resides back in her native Kentucky with her husband, her son, and two neurotic cats (as if there were any other kind).

GOR008758886
Best Man Under The Mistletoe: Best Man Under the Mistletoe (Texas Cattleman's Club: Blackmail) / Baby in the Making (Accidental Heirs) by Jules Bennett
Jules Bennett
Used - Very Good
Paperback
HarperCollins Publishers
2017-11-16
384
0263928470
9780263928471
N/A
Book picture is for illustrative purposes only, actual binding, cover or edition may vary.
This is a used book - there is no escaping the fact it has been read by someone else and it will show signs of wear and previous use. Overall we expect it to be in very good condition, but if you are not entirely satisfied please get in touch with us.