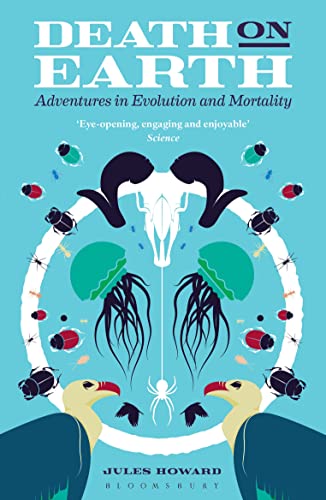 Death on Earth
by Jules Howard

Death on Earth: Adventures in Evolution and Mortality by Jules Howard

There is nothing more life-affirming than understanding death in all its forms. Natural selection depends on death; little would evolve without it. Every animal on Earth is shaped by its presence and fashioned by its spectre. We are all survivors of starvation, drought, volcanic eruptions, meteorites, plagues, parasites, predators, freak weather events, tussles and scraps, and our bodies are shaped by these ancient events. Some animals live for just a few hours as adults, others prefer to kill themselves rather than live unnecessarily for longer than they are needed, and there are a number of animals that can live for centuries. There are parasites that drive their hosts to die awful deaths, and parasites that manipulate their hosts to live longer, healthier lives. There is death in life. Amongst all of this, there is us, the upright ape; perhaps the first animal in the history of the universe fully conscious that death really is going to happen to us all in the end. With a narrative featuring a fish with a fake eye, the oldest animal in the world, the immortal jellyfish and some of the world's top death-investigating biologists, Death on Earth explores the never-ending cycle of death and the impact death has on the living, and muses on how evolution and death affect us every single day. Why are we so weird about death? Where does this fear come from? Why are we so afraid of ageing? And how might knowledge of ageing in other animals help us live better lives, free of the diseases of old age?

An altogether eye-opening, engaging, and enjoyably humorous (but never distasteful) guided tour through the world of death. * Science *
What becomes clear in this impossibly bouncy, Tiggerish work is that living things have more ways of dying than we could ever imagine. * Daily Mail *
... funny, clever, but also chock full of science ... a book that's a genuine pleasure to read. * Discover Magazine *
A fascinating read that offers incredible snippets about how life is never wasted, and provides a fresh, less gloomy outlook on our ultimate fate. * BBC Wildlife *
Genuinely funny and busy with intriguing detail ... Howard shares with science writers like Ed Yong an aptitude for teaming attention-grabbing zoology with astute and well-researched analysis. * New Humanist *
Death on Earth fizzes with with life. Howard, whether dressed in waterproof trousers to protect him from rotting pig flesh, or clutching a dead magpie to his chest while looking for a suitable place to watch it decay, makes for the most extraordinary psychopomp. I cried with laughter as he tackled this most persistent of taboos, and yet at the same time was strangely moved by the intensity of his care. It has been oddly reassuring to walk alongside Jules on his exploration of the last great frontier. -- Katharine Norbury, author of The Fish Ladder
Jules Howard celebrates wonderful, vibrant life in the face of death. Drawing on what we can learn from the living, from the cells in your body to geriatric clams and naked mole rats, he allows us to approach and even appreciate why lives, like all good stories, have endings. -- Brian Switek, author of My Beloved Brontosaurus
Hidden in a breezy overview of death in the animal kingdom rages a life-and-death war that puts into perspective our human struggles with mortality. Death on Earth gives us insight into who we are and why we are special - and not so special - when compared to our animal brethren. -- Megan Rosenbloom, director of Death Salon

Jules Howard is a zoologist, writer, blogger and broadcaster. He writes on a host of topics relating to zoology and wildlife conservation, writing regularly for BBC Wildlife Magazine and the Guardian, and on radio and TV including BBC Breakfast, Sunday Brunch, Springwatch and BBC 5 Live. Jules also runs a social enterprise that has brought 100,000 young people closer to the natural world. Death on Earth is his second book, following 2014's Sex on Earth. www.juleshoward.co.uk / @juleshoward

Introduction PART 1: THIS IS A DEAD FROG Chapter 1: Life and Death in the Universe Chapter 2: Senescence and What Waits for the Lucky Few Chapter 3: Fear and Loathing in Birchwood Chapter 4: Free Radicals and the Secrets Within Chapter 5: This is a Dead Frog PART 2: THE EXPERIMENTAL PIG PHASE Chapter 6: The Circus under the Tent Chapter 7: Sex and Death: The Contract Killer Chapter 8: Coffee with the Widow-maker Chapter 9: Suicide, Snowy Owls and the Executioner Insider Chapter 10: This is Not a Sheep Chapter 11: The Grotto Salamander and the Guano Chapter 12: The Horrid Ground-weaver Chapter 13: Dark Matters PART 3: JOURNEY TO THE END OF THE SHITATITE Chapter 14: Bring out your Dead Ants Chapter 15: Mourning has Broken Chapter 16: Who Wants to Live Forever? Chapter 17: No, this is a Dead Frog Epilogue: The Meaning of the Loa Loa Acknowledgements Index

GOR008692488
Death on Earth: Adventures in Evolution and Mortality by Jules Howard
Jules Howard
Used - Very Good
Paperback
Bloomsbury Publishing PLC
2017-05-18
288
1472915097
9781472915092
N/A
Book picture is for illustrative purposes only, actual binding, cover or edition may vary.
This is a used book - there is no escaping the fact it has been read by someone else and it will show signs of wear and previous use. Overall we expect it to be in very good condition, but if you are not entirely satisfied please get in touch with us.