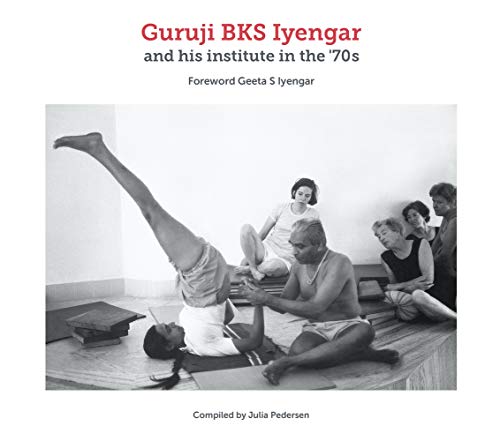 A treasure trove of memories of Yogacharya B.K.S. Iyengar and his Yoga Institute RIMYI.

Guruji BKS Iyengar and his institute in the '70s Summary

Guruji B.K.S. Iyengar was one of the foremost teachers of yoga and is widely credited with popularising yoga in the world today. He was an inspiring teacher, practitioner, author and philosopher of yoga. In the 1970s he opened his yoga institute RIMYI, where his unique approach inspired many who have gone on to teach Iyengar yoga to new generations of students.

This book is a celebration of those years, with the story told through previously unpublished candid photographs and first-hand accounts from his students from the early days. The result is a must-read for anyone with an interest in Guruji Iyengar's immense contribution to modern yoga practice, and brings him alive for those who follow his teachings today.

Customer Reviews - Guruji BKS Iyengar and his institute in the '70s

Guruji BKS Iyengar and his institute in the '70s Reviews

A beautifully produced book which will bring back fond memories for many and open the eyes of many others. The black and white photos are incredibly special, and it is wonderful to see Guruji's smiling face in so many of them. Very much like a cactus fruit, Guruji was prickly on the outside but sweet and delicious on the inside. The photos bring out the energy, vitality, and passion of Guruji so clearly, and show his dedication to the art of yoga.

The pictures are enhanced by the written memories of those who have contributed and shared their experiences of being taught by such a great yoga master. Their personal insights and honesty of their experiences were often very touching to read. I found that the initials at the end, meant I had to keep going back to find out who they were!

Nevertheless, I would recommend this book to all Iyengar yogis throughout the world. For those who did meet him, to remind them of his expert teaching, and for those who never got the chance to meet him, to show exactly what he was like. Wendy Haring, Chair of The British Wheel of Yoga

-- Wendy Haring, Chair of The British Wheel of Yoga

Julia first went to India to study yoga in 1970 in Chennai. After 5 years she began studying with the Iyengars in 1976 and has been going continuously ever since. She has taught Iyengar yoga since 1976 and also worked as a chiropractor and acupuncturists for many years. She currently teaches in Sydney at Glebe Iyengar Yoga.

Georg is a Danish cellist who teaches at the Sydney University Conservatorium of Music. He took the majority of the photos for Guruji BKS Iyengar and his institute in the '70s, which was compiled by Julia Pedersen.

GOR011100981
Guruji BKS Iyengar and his institute in the '70s by Julia Pedersen
Julia Pedersen
Used - Like New
Hardback
Pinter & Martin Ltd.
2020-10-29
192
1906756651
9781906756659
N/A
Book picture is for illustrative purposes only, actual binding, cover or edition may vary.
The book has been read, but looks new. The book cover has no visible wear, and the dust jacket is included if applicable. No missing or damaged pages, no tears, possible very minimal creasing, no underlining or highlighting of text, and no writing in the margins.