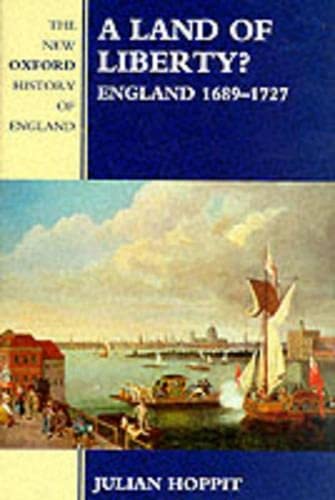 This book provides an authoritative general view of England between the Glorious Revolution and the death of George I and Isaac Newton. It is a very wide ranging survey, looking at politics, religion, economy, society, and culture. It also places England in its British, European, and world contexts. An annotated bibliography provides a guide through a vast minefield of secondary literature.

The Glorious Revolution of 1688-9 was a decisive moment in England's history; an invading Dutch army forced James II to flee to France, and his son-in-law and daughter, William and Mary, were crowned as joint sovereigns. The wider consequences were no less startling: bloody war in Ireland, Union with Scotland, Jacobite intrigue, deep involvement in two major European wars, Britain's emergence as a great power, a 'financial revolution', greater religious toleration, a riven Church, and a startling growth of parliamentary government. Such changes were only part of the transformation of English society at the time. An enriching torrent of new ideas from the likes of Newton, Defoe, and Addison, spread through newspapers, periodicals, and coffee-houses, provided new views and values that some embraced and others loathed. England's horizons were also growing, especially in the Caribbean and American colonies. For many, however, the benefits were uncertain: the slave trade flourished, inequality widened, and the poor and 'disorderly' were increasingly subject to strictures and statutes. If it was an age of prospects it was also one of anxieties.
Hoppit's book is inclusive. His chapters on the church are excellent, and his vignettes of royal figures - Queen Anne being the most insightful - are delights. This book will stand the test of time. * Canadian Journal of History *
[A] exemplary book...astute and intelligent. * Penelope J. Corfield, Times Literary Supplement *
England after the Glorious Revolution ; The Glorious Revolution and the Revolution Constitution ; The Facts of Life ; A Bloody Progress ; The Political World of William III ; Wars of Words and the Battle of the Books ; Faith and Fervour ; England, Britain, Empire ; The Political World of Queen Anne ; Profits, Progress and Projects ; The Wealth of the Country ; The Political World of George I ; Urban and Urbane ; An Ordered Society ; Epilogue ; Chronology ; Bibliography ; Index
GOR001235053
9780198228424
0198228422
A Land of Liberty?: England 1689-1727 by Julian Hoppit (Professor of British History, University College London)
Julian Hoppit (Professor of British History, University College London)
New Oxford History of England
Used - Very Good
Hardback
Oxford University Press
2000-06-22
602
N/A
Book picture is for illustrative purposes only, actual binding, cover or edition may vary.
This is a used book - there is no escaping the fact it has been read by someone else and it will show signs of wear and previous use. Overall we expect it to be in very good condition, but if you are not entirely satisfied please get in touch with us
Trustpilot