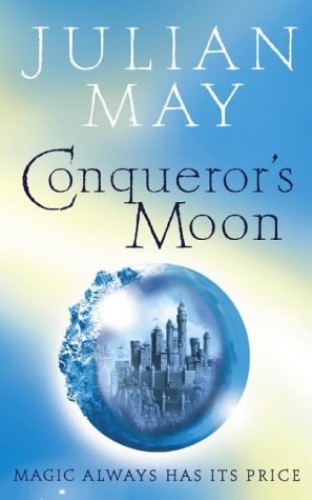 Conqueror's Moon
by Julian May

A powerful new fantasy adventure filled with dark magic and deadly intrigue, from the worldwide bestselling author of the Saga of the Pliocene Exile.

Conqueror's Moon: Part One of the Boreal Moon Tale by Julian May

A powerful new fantasy adventure filled with dark magic and deadly intrigue, from the worldwide bestselling author of the Saga of the Pliocene Exile.

He has so far been thwarted in this ambition by his cautious, aging father, King Olmigon, who, though weak with illness, still clings firmly to the reigns of the government.

Now Conrig has hit upon a scheme that will convince the Lords that his plan can suceed. He has formed an alliance with Ullanoth, princess of the remote northern province of Moss and a fearsome sorceress. With her help his army will have the advantage it needs to subdue the only domain refusing to sign his Edict of Sovereignty.

But before Olmigon will give his consent he insists on making a pilgrimage to the Oracle of Emperor Bazekoy, there to ask the one question permitted to a dying monarch, which the Emperor must answer truthfully.

Meanwhile, Ullanoth tends her own schemes. Posessing the talent to call on the unearthly powers of the Beaconfolk, mysterious otherworldy beings who appear as lights in the sky, her power is undeniable. But the Lights are fickle, and their interference in human affairs unpredictable. If Ullanoth calls on them to help Conrig, they are likely to extract an unforeseeable price.

Inventive use of magic and a well-conceived plot will sweep readers along. ("Publishers Weekly") An outstanding world-builder. ("Booklist") Skillful world-building and keenly developed characters. ("Library Journal")

Julian May is the author of the Saga of the Pliocine Exile (The Many-Coloured Land, The Golden Torc, The Nonborn King), The Galactic Millieu Trilogy, Black Trillium (with Marion Zimmer Bradley and Andre Norton), Blood Trillium and Sky Trillium, and most recently The Rampart Worlds. The author lives in the state of Washington.

GOR000613479
Conqueror's Moon: Part One of the Boreal Moon Tale by Julian May
Julian May
Used - Very Good
Paperback
HarperCollins Publishers
2004-10-04
512
0007123205
9780007123209
N/A
Book picture is for illustrative purposes only, actual binding, cover or edition may vary.
This is a used book - there is no escaping the fact it has been read by someone else and it will show signs of wear and previous use. Overall we expect it to be in very good condition, but if you are not entirely satisfied please get in touch with us.