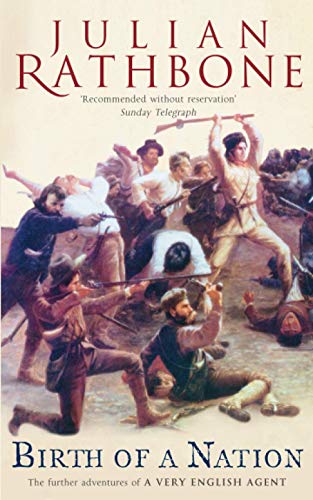 Birth Of A Nation: A Novel
by Julian Rathbone

In Stock
$13.49
inc. GST
* A heady cocktail of fact and fiction this is a hilarious exploration of the lacunae in official histories, demonstrating that it's the fittest who survive - but the fittest are not necessarily the biggest and strongest. The sequel to the hugely successful A VERY ENGLISH AGENT
Very Good
Only 2 left

Birth Of A Nation: A Novel Summary

Birth Of A Nation: A Novel by Julian Rathbone

Eddie Bosham (aka Charlie Boylan) is in prison on a murder charge. But he's not worried. He's innocent, and, anyway, he has hidden proof of a ghastly scandal that could bring down the monarchy.

Taking up his memoirs from where we left him, marooned on the Galapagos Islands, we find Eddie offering a young Charles Darwin an explanation of why the finches on the islands vary. In Texas, staunchly loyal to whichever side will win, he spies for General Santa Anna at the Alamo and, with the help of Emily Morgan, the ravishingly beautiful Yellow Rose of Texas, for Sam Houston at San Jacinto.

Eddie works the Mississippi riverboats as a cardsharp. Caught cheating, he is forced to jump ship and inadvertently stumbles across the secret that will launch the Californian Gold Rush. Finally, having traversed the girth of a nation, his disgraceful saga ends, back east, at a highly inflammatory revivalist meeting.

Birth Of A Nation: A Novel Reviews

Tremendous fun, as Julian Rathbone plays fast and loose with great swathes of American history . . . He wears his learning lightly and has a disarmingly flippant side. BIRTH OF A NATION is notable for the sheer breadth of the material it contains. The narrative meanders, but to excellent purpose, as Rathbone finds a succession of contrasting milieus, all superbly described, for his itinerant hero . . . the novel can be recommended without reservation. It has all the ingredients -- a likeable hero, a string of feisty heroines, well-drawn locales, dramatic reversals of fortune -- of the classic English adventure story * SUNDAY TELEGRAPH *
Julian Rathbone has always set subversively right the things most popular fiction is content to leave wrong. His thrillers are in the fine tradition of Eric Ambler: radical critiques of the way things are, and of the way most thrillers accept that status * INDEPENDENT *
If history, as Marx suggested, repeats itself first as tragedy and next as farce, then Charlie's rollicking version of it is firmly in the second camp * FINANCIAL TIMES *
Clever stuff this. Rathbone writes well, has a vast knowledge of his subject, and is witty * HERALD *

Julian Rathbone was the author of many highly-acclaimed novels. Two of which (KING FISHER LIVES and JOSEPH) were shortlisted for the Booker Prize. He died in February 2008.

GOR000600987
Birth Of A Nation: A Novel by Julian Rathbone
Julian Rathbone
Used - Very Good
Paperback
Little, Brown Book Group
2005-07-14
448
0349118957
9780349118956
N/A
Book picture is for illustrative purposes only, actual binding, cover or edition may vary.
This is a used book - there is no escaping the fact it has been read by someone else and it will show signs of wear and previous use. Overall we expect it to be in very good condition, but if you are not entirely satisfied please get in touch with us.