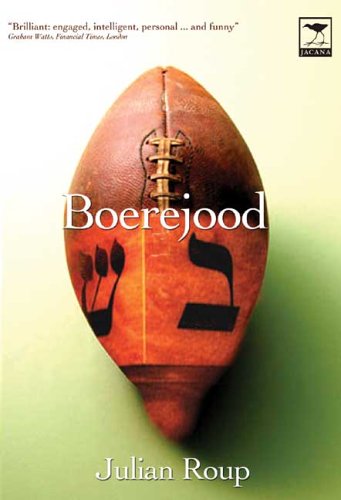 Since the end of white minority rule in South Africa, Afrikaners have felt that they have little voice in the "new" country. This title, whilst not representing an apologia for old policies, reflects on the loss of a way of life.

Boerejood is biography crossed with the unpacking of political mystery, crossed with a travel book. A bit of a chameleon - a book of many colours. It takes readers on a 1,000 mile journey round the Cape as Capetonian returns after 25 years abroad to seek an understanding of the SA 'Miracle'. The writer grows up with a foot in two cultures and finding that this can be both uncomfortable & funny. It speaks of then and now and how to live in South Africa today. The book is NOT an apologia for the Afrikaners - but I do speak up for them. It is about the loss of land, language and culture - it is a sad song from the heart of a half Afrikaans expatriate. It is a bifocal view of South Africa which compares and contrasts the Jews and the Afrikaners. It poses the question: 'Will the Afrikaners survive as a tribe, a culture. Will Afrikaans be a language for cyberspace only.?
"Julian Roup is an Afrikaner in exile: or rather, a part-Afrikaner, son of an Afrikaner mother and a Jewish father, a Boerejood. Boer, once a title worn with pride, became Roup writes: 'a label of contempt in the mouths of other white South Africans and hatred in the mouths of blacks.' Roup had himself seen them - his own people - as 'hypocritical racists who gave us apartheid.'

And yet ... 'despite everything, Afrikaans forms one of the chambers of my heart, and as such it must survive if I am to live fully.'

His piece is a delicate exploration of a society 10 years after the end of apartheid and the onset of majority rule. He has no nostalgia for the old regime, but immense sadness for the embattlement of the Afrikaans language and culture. The small society of Afrikaner liberals now feels a little of the discrimination they opposed: and many see no future for the culture except in racial ghettoes - which they do not want.

It may be that the language and the culture - losing, bit by bit, its oppressive connotations - will survive, even flourish. After all, the great poet and also an exile, Breyten Breytenbach, still writes in Afrikaans.

But maybe, as the Afrikaners say: 'Die koeel is deur die kerk - en die dominee is dood.' Which means, literally, 'The bullet is through the church and the vicar is dead, ' or, as the English saying less vividly has it, 'It's too late for tears.'" --John Lloyd, Editor, Financial Times Saturday Magazine

Julian Roup was born and lived in Cape Town for the first 30 years of his life. He started his working life as a biscuit salesman before doing a journalism degree at Rhodes University in Grahamstown.
He moved to England in 1980 and worked in local journalism in Sussex before changing direction once more to work in PR consultancies in London. He later founded his own PR consultancy, which he ran for 10 years.
He is the author of A Fisherman in the Saddle, a book about his twin passions, fishing and horse riding. He currently works for an international fine art auction house in London. He is married with two children and lives in the Kent-Sussex border country known as the Weald.
GOR003669511
9781770090224
1770090223
Boerejood by Julian Roup
Julian Roup
Used - Very Good
Paperback
Jacana Media (Pty) Ltd
2004-11-30
250
N/A
Book picture is for illustrative purposes only, actual binding, cover or edition may vary.
This is a used book - there is no escaping the fact it has been read by someone else and it will show signs of wear and previous use. Overall we expect it to be in very good condition, but if you are not entirely satisfied please get in touch with us
Trustpilot