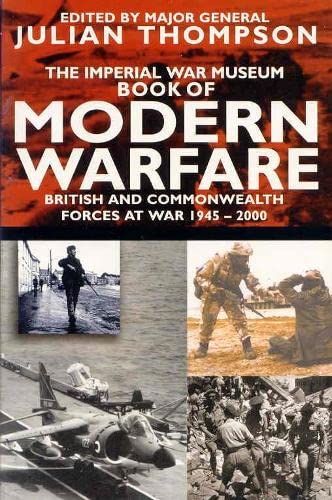 Out of Stock
$17.49
inc. GST
An authoritative and readable book that fills a gap in British and Commonwealth military history.
Well Read
Only 0 left

IWM Book of Modern Warfare: British and Commonwealth Forces at by Julian Thompson

Since 1945, British and Commonwealth troops have been involved in fifteen major campaigns and conflicts, not a single year having passed in peace.

In this remarkable record, the first book to cover the whole of this remarkable period in military history, the chapters (Java, Palestine, Malaya, Korea, Kenya, Cyprus, Canal Zone & Suez, Muscat and Oman, Brunei and Borneo, South Arabia/Aden, Northern Ireland, Dhofar, Falklands, Gulf, Bosnia & Kosovo) are all by an acknowledged expert and/or participant. For example, the Korean chapter is by General Sir Anthony Farrar-Hockley who, as a captain, was captured after the epic stand of the Glosters at the Imjin in Korea. He was a persistent escaper, but never made friendly lines, and was singled out for 'special treatment', a euphemism for torture, by the Chinese and North Korean camp guards and interrogators. The chapter on the recapture of Jebel Akhdar (in Oman) is by Tony Deane Drummond who commanded the SAS there and describes one of the most daring feats of modern warfare.

Major General Julian Thompson joined the Royal Marines at 18, serving for 34 years. He led the 3rd Commando Brigade in the Falklands, and was in the thick of the fighting. He is now a Visiting Professor in the Department of War Studies, King's College, London. Among his many previous books are The Royal Marines, The IWM Book of the War at Sea and The IWM Book of War Behind Enemy Lines.

GOR010387737
IWM Book of Modern Warfare: British and Commonwealth Forces at by Julian Thompson
Julian Thompson
Used - Well Read
Paperback
Pan Macmillan
2003-02-21
400
0330393049
9780330393041
N/A
Book picture is for illustrative purposes only, actual binding, cover or edition may vary.
This is a used book. We do our best to provide good quality books for you to read, but there is no escaping the fact that it has been owned and read by someone else previously. Therefore it will show signs of wear and may be an ex library book.