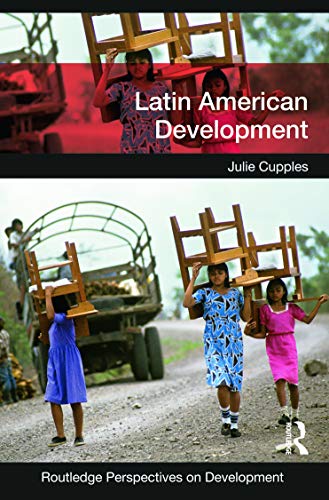 Latin America's diverse political and economic struggles and triumphs have captured the global imagination. The region has been a site of brutal dictators, revolutionary heroes, the Cold War struggle and as a place in which the global debt crisis has had some of its most lasting and devastating impacts. Latin America continues to undergo rapid transformation, demonstrating both inspirational change and frustrating continuities.

This text provides a comprehensive introduction to Latin American development in the twenty-first century, emphasizing political, economic, social, cultural and environmental dimensions of development. It considers key challenges facing the region and the diverse ways in which its people are responding, as well as providing analysis of the ways in which such challenges and responses can be theorized. This book also explores the region's historical trajectory, the implementation and rejection of the neoliberal model and the role played by diverse social movements. Relations of gender, class and race are considered, as well as the ways in which media and popular culture are forging new global imaginaries of the continent. The text also considers the increasing difficulties that Latin America faces in confronting climate change and environmental degradation.

This accessible text gives an overarching historical and geographical analysis of the region and critical analysis of recent developments. It is accompanied by a diverse range of critical historical and contemporary case studies from all parts of the continent, providing readers with the conceptual tools required to analyse theories on Latin American development. Each chapter ends with a summary section, discussion topics, suggestions for further reading, websites and media resources. This is an indispensable resource for scholars, students and practitioners.

"This book is a delight and its approach long overdue. By broadening its interpretation of the meaning of 'development' and by addressing many of the most contested issues in academic and political debates in and on Latin America, it brings home to the reader, but in an eminently comprehensible and digestible form, the complexity of the region's recent and contemporary patterns of economic, social and political transformation. Moreover, to its great credit, it does so with a sharp eye, a sympathetic ear and a clarity and comprehensiveness which have all been sadly lacking in such books for several decades. This book sets the picture straight and does us all an invaluable service." Antoni Kapcia, Professor in Latin American History, Faculty of Arts, University of Nottingham, UK.

"This book is a critical introduction to Latin America and its experience with development, and provides an invaluable resource to both students and scholars. Historically and geographically rich, this book examines processes of state formation and political economic thought through the colonial period and the Republican era, the emergence of Industrial Import Substitution and the dependency school, and the rise of neoliberalism and its discontents. These historical transformations have of course been marked by ideological struggle and political violence, and Julie Cupples proves the ideal guide to the continent's shifting political and economic landscapes. The book highlights difference as well as continuity, and its attention to the region's immense ethnic, linguistic, cultural, class, and ecological diversity is particularly valuable. Latin American Development provides a nuanced and authoritative look at political and economic change in the American continent." Tom Perreault, Associate Professor of Geography, Department of Geography, Syracuse University, USA

Julie Cupples currently lectures in Human Geography at the University of Edinburgh. She has been working in and on Latin American development for more than two decades, through both Central American solidarity and academic scholarship. Most of her research has been carried out in Nicaragua. She has published widely on a range of themes including postdevelopment, gender, revolution and conflict, neoliberalism, elections, municipal governance, indigenous and community media, and climate change, disasters and environmental risk.

GOR007115503
Latin American Development by Julie Cupples (University of Edinburgh, UK)
Julie Cupples (University of Edinburgh, UK)
Routledge Perspectives on Development
Used - Very Good
Paperback
Taylor & Francis Ltd
2013-03-22
276
041568062X
9780415680622
N/A
Book picture is for illustrative purposes only, actual binding, cover or edition may vary.
This is a used book - there is no escaping the fact it has been read by someone else and it will show signs of wear and previous use. Overall we expect it to be in very good condition, but if you are not entirely satisfied please get in touch with us.