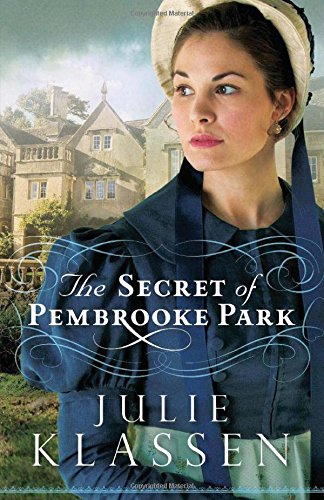 The Secret of Pembrooke Park
by Julie Klassen

Out of Stock
$70.99
inc. GST
As secrets come to light at the abandoned manor house Pembrooke Park, will Abigail find the hidden treasure and love she seeks...or very real danger?
Very Good
Only 0 left

The Secret of Pembrooke Park Summary

The Secret of Pembrooke Park by Julie Klassen

Praise for Julie Klassen
"
""A remarkable tale with many unpredictable twists and turns."--"CBA Retailers+Resources
""A treat for [readers] who want their historical romances served up with a generous dash of mystery."--"Booklist
"
"[Klassen's] work appeals to all who seek a riveting Regency romance."--"RT Book Reviews"
Abigail Foster is the practical daughter. She fears she will end up a spinster, especially as she has little dowry, and the one man she thought might marry her seems to have fallen for her younger, prettier sister.
Facing financial ruin, Abigail and her father search for more affordable lodgings, until a strange solicitor arrives with an astounding offer: the use of a distant manor house abandoned for eighteen years. The Fosters journey to imposing Pembrooke Park and are startled to find it entombed as it was abruptly left: tea cups encrusted with dry tea, moth-eaten clothes in wardrobes, a doll's house left mid-play...
The handsome local curate welcomes them, but though he and his family seem acquainted with the manor's past, the only information they offer is a stern warning: Beware trespassers drawn by rumors that Pembrooke Park contains a secret room filled with treasure.
This catches Abigail's attention. Hoping to restore her family's finances--and her dowry--Abigail looks for this supposed treasure. But eerie sounds at night and footprints in the dust reveal she isn't the only one secretly searching the house.
Then Abigail begins receiving anonymous letters, containing clues about the hidden room and startling discoveries about the past.
As old friends and new foes come calling at Pembrooke Park, secrets come to light. Will Abigail find the treasure and love she seeks...or very real danger?

Three-time Christy Award winner Julie Klassen loves all things Jane--"Jane Eyre "and Jane Austen. A graduate of the University of Illinois, Julie worked in publishing for sixteen years and now writes full time. She and her husband have two sons and live in St. Paul, Minnesota. Learn more at www.julieklassen.com.

GOR010206177
The Secret of Pembrooke Park by Julie Klassen
Julie Klassen
Used - Very Good
Hardback
Baker Publishing Group
2014-12-01
416
0764212788
9780764212789
N/A
Book picture is for illustrative purposes only, actual binding, cover or edition may vary.
This is a used book - there is no escaping the fact it has been read by someone else and it will show signs of wear and previous use. Overall we expect it to be in very good condition, but if you are not entirely satisfied please get in touch with us.